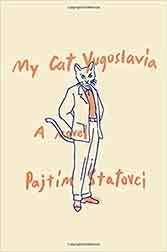 A Kosovar immigrant to Finland, Bekim, has an unsatisfying one-night-stand with a gay lover, after which he decides on more permanent (and reliable) company: a boa constrictor. The boa makes for fine if quirky companion until he meets a talking cat in a bar out of which comes an edgy ménage-a-trois. Where is all surrealism headed? Into the past, of course.

Pajtim Statovci, himself a Finn from Kosovo, uses his “animated” introduction to dig into how stranger-in-a-strange land Bekim became the man he is, introducing his mother Emine (the novel’s second narrator), his abusive, Allah-fearing father Bajram (he calls Bekim a donkey and a dog), and the family’s Tito Era roots in Kosovo. Gradually, Bekim’s snake and cat are revealed as half-imagined, half-real “pets” reconfigured from his Balkan youth and uneasily installed in foreigner-loathing Finland. The talking feline wears “thick-rimmed sunglasses” hates gays and immigrants — “There are quotas for people like you, though they’ll never admit it. A bit of color, something exotic, you know, something different.” — and behaves every bit as insultingly as Bekim’s estranged father. Both cat and snake ooze metaphors (the title is hint enough) and add a dreamlike, self-loathing component to the repressed mix. “No one will ever love you,” spits the cat.

Mother Emine, meanwhile, has her own stories to tell: of growing up in rural Kosovo, her arranged marriage to Bajram, bearing seven children (Bekim the most troubled), and Bajram’s madcap decision to move the family to a place as remote from Kosovo as Mars. There’s a steep price to pay, and no one in the family emerges unscathed.

This is, to put it mildly, an ambitious effort to cover the compass points of dislocation, at times both luminous and brave. Statovci, only 24 when he wrote the novel, effectively portrays the superstitious and sublimated anatomy of personal and cultural displacement, but it can be jagged going. The novel’s triumph is in the unconventional means it uses to get to core of being someone or no one in a new place, all the while tugged at by old values. Its weakness is that same ambition, putting snakes, cats, memorable mothers and angry fathers into an overly thick stew. It is at its best when narrated by Emine, whose recollection of her Albanian upbringing is a tapestry of an Ottoman world. Once free of Bajram, she will adjust as best she can.

This is a Pilgrim’s Progress story with strange pilgrims and an even stranger notion of progress. In Emine’s eyes its moral is twofold. It is trauma that makes for reptiles and talking cats — “The war had changed everything. It laughed at things that had once been sacred and didn’t care about people’s faces.” — and to swap one country for another, while feasible, even admirable, takes an indelible toll that non-émigrés cannot fathom. Straps break and old luggage pops open, what’s under the lid too great to ever pack back in.