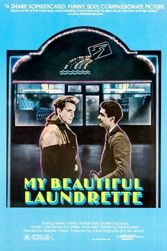 In demoralized Pakistani London of the 1980s, Omar (Gordon Warneke) gets an heirloom, his uncle’s laundrette (laundromat in American English). It’s quite an honor in a city that’s busy shedding leftover socialism and running headlong into Margaret Thatcher’s thorny embrace. Meanwhile, Johnny (Daniel Day-Lewis), Omar’s white “friend,” tries to navigate multiculturalism and capitalism by helping out.

Director Stephen Frears deftly handles scalding material. Omar wants to know why white Johnny can’t or won’t “integrate” himself into the community — a reverse of usual typecasting. Johnny, who should be of the Thatcher tribe, isn’t, and then some. He’s gay. The movie effectively portrays the clumsy travails of two kinds of outsiders; what they do to like themselves and make displacement work in their favor. The kicker, and Frears can’t resist cheering it on, is the delightful erotic bond between the two men — though Omar of course on the family-arranged marriage track. From a story by prolific novelist Hanif Kureshi, a Pakistani Londoner who revels in sticky situations.