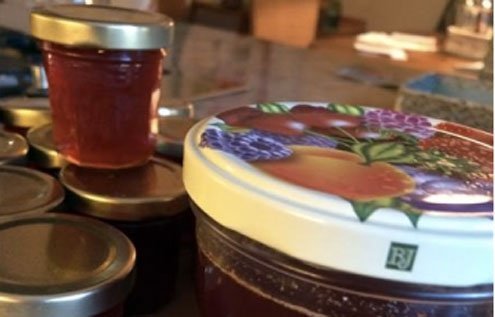 Tis the season to make pepper jelly because the peppers are at their most flavorful in September.
W

e’re coming to the end of summer and I already have hot pepper jelly on my mind. That’s just for Thanksgiving. December can look ahead to plum puddings laced with cognac.

But let’s start with the jelly.

My esteemed mother taught me the how-to as I pestered her beside a hot pot of crimson liquid bubbling on the stove. Step one was to keep animals and small children out of the jelly-making arena (thank heavens my mother never stuck to rules).

Step two was making sure you had a very large pot, so that the jelly wouldn’t boil over and coat the burners with stubborn and sticky-sweet goop.

Step three was learning when your jelly had reached perfection so that you could strain it into jars for the turkey to come.

Step four was all about finding that package of a dozen tiny little jars to hold your diligently prepared delight so that you’d have quick gifts for unplanned recipients come holiday-time.

I make my jelly in September because it’s when summer’s lovely sweet red peppers are fat with flavor, their sugar and pectin content especially high.

Here are the basics: For every four large sweet red peppers you’ll need a small sweet onion, a small hot pepper (or a few shakes of ground pepperoncino), 1/2 teaspoon of salt, five level cups of white sugar, 1 1/2 cups apple cider vinegar, half-a-cup of lemon juice, and six ounces (170 grams) of pectin. This should fill up two or three old jam jars. You can pour any overflow into the gift containers.

Seed the peppers and cut them into chunks along with the onion. In a blender or food processor, let the mixture whiz for a few seconds, and then add the vinegar, salt and lemon juice. Blend all of it into liquid form.

Transfer the pepper mixture into a large sieve positioned over your jelly pot. Stir with whisk or spatula, pressing all the pepper juices into the pot and leaving the residue in the sieve as dry as possible. Keep the pepper residue, which you can use for pasta sauces.

Add the sugar to the pepper juice and stir well until the sugar dissolves.

Bring the mixture to a rolling boil, ensuring it doesn’t boil over (lower the flame or stir once or twice). Cook for 10 minutes.

Add the pectin, stirring well to dissolve, and cook at a rolling boil for another minute.

Dip a large spoon into the mixture, and, turning the spoon so that the jelly drips off its long edge, see if the jelly falls in a single thick strand. Jelly that’s too thin breaks into many strands, so work to get the consistency right.

Stop cooking! Your jelly now is ready for its home. It should look clear and nearly sparkle with color. Stir the jelly one more time and pour it into a second container with a spout (for easier pouring into smaller containers). Screw the jar lids tight and let the jars cool.

Placed in the fridge, the jelly will store for months. It should also keep until the holidays in a cool cupboard. Though commercial pepper jelly is available at specialty stores, the homemade version sings.

Serve it with thin slices of Spanish manchego cheese, or as an accompaniment to lamb, pork or chicken. In my family, pepper jelly came ahead of cranberry sauce at Thanksgiving. Stirring it into any meat or chicken reduction will give any final product a zing.

Thirty minutes of prep time, cooking and jar-filling are small investment on such an intimate personal treat.

My mother would slip a small jalapeño into the mix. Do the same if you can. It’ll definitely liven up the party.