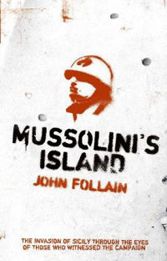 he strength of Follian’s book is also its weakness: choice of characters. He narrates the invasion of Sicily using British and Italian participants as storytellers. This works better on the British and American sides than on the Italian, with the latter tumbling into occasional cliché (“The Sicilian jabbed a fat finger…” and so on.)

But Follian knows how to tell a good story and his affection for Sicily is sincere. In war, as Follain’s interviews reveal poignantly, decisions are often made by “men” in their teens or just older. The Sicilian campaign of 1943 often takes second fiddle to the Anzio invasion, so this book is in every sense a good deed.