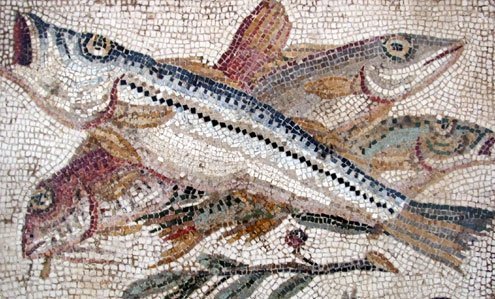 Fish mosaic in Pompei.
I

t’s hard to know when a fish is at its freshest. Unlike a carton of milk with an expiration date or head of lettuce in which crispiness counts, fish is not easily judged. This helps explain why some people get cold feet when it comes to cooking it. They’re nervous. With luck, this column will help demystify the fish section of your local market and open you up to a few new dishes.

Key rule no. 1, which holds true for fish, shellfish or crustaceans: the catch shouldn’t smell fishy. Fresh fish should instead have a slightly salty odor, maybe with a hint of cucumber. Smelly fish is past its prime and cooking it won’t help.

Last week, on a slow Tuesday morning at Ristorante Pierluigi , I helped Alfredo, the fish guy, clean some mussels. When it comes to mussels and other shellfish, he told me, weight is a good freshness indicator. Fresh mussels are still waterlogged and weigh more. He gave me two mussels of the same size, one from Tuesday and one from the day before. Tuesday’s was noticeable heavier.

Since it’s hard for an unpracticed hand to know mussel weight, another test can help. All shellfish should still be alive when cooked. If you poke at a fresh one (very much alive), the shell should quickly contract. A sluggish reaction isn’t a good sign.

Another interesting mussel fact: the best come from Puglia, where mussels have smallish shells but the creatures themselves are plump, filling out the whole shell. Though Sardinian ones come in larger shells, it’s deceptive: the creatures aren’t much bigger.

From mussels we moved on to fish. There are three ways to tell if a fish is fresh. It’s an inexact science so you need to consider all three.

First, a general rule: buy a whole fish if you can, or at least examine the fish from which you’re buying a cut. Have the fishmonger fillet it rather than buying it pre-filleted. Why? It’s much easier to tell freshness when you see the whole body, and a fish that hasn’t been filleted is less likely to have been sitting around for a while (otherwise the fishmonger would have gone ahead with the filleting process).

When you look at a fish, examine its eyes. In a truly fresh fish, the jet-black eyeballs curve upward from the socket. After a day or two, the curve flattens out and can even become slightly concave (at that stage, the fish is still very good, and can even be eaten raw).

The final stage is when the blackness vanishes and the eye turns cloudy. At this point the fish is still edible but should not be eaten raw.

The second way to test a fish’s freshness is by feeling the hardness of the meat. Fresh fish meat is firm, while older meat becomes mushy. The reason is the acid in the meat itself, which age breaks down. Think of your thumbs. A fresh fish, when you poke it, should feel a bit like a taut thumb tip. If it feels like the fatty part of your palm, it’s older.

The “thumb” method comes with experience, but once you get the hang of it, it’s all but foolproof. When Pierluigi owner Roberto comes into the kitchen he doesn’t even look at the fish. Instead, he prods it with his index finger to confirm his fish man’s judgment on freshness.

The last tool is skin color. Fresh fish holds its natural colors. Again, the problem is comparison. Alfredo gave me a case in point while cleaning a sea robin, which by then was a few days old. Along the spine (a good indicator), bright orange shades stood out, while the rest of fish was grayer, its vibrant reds and oranges muted.

Smell becomes essential if you’re buying a fillet rather than a whole fish. If the fish still has its skin, you can check the color. If not, go to the flesh-pressing method, if the fishmonger lets you.

If correctly maintained, fish lasts impressively longer than I’d first thought. A fish on ice from the moment it’s caught until oven or frying pan cooking can remain fresh for three days (including for eating raw). It’ll taste fine for cooking for up to five days. Fish as old as a week can still be used in sauce.