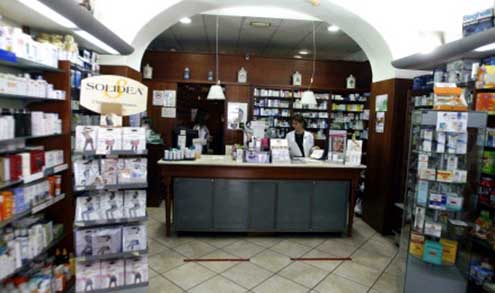 Learn to expect the unexpected in an Italian pharmacy.
O

ne day last fall I was sitting in front of a computer screen at my office’s reception desk scrolling through the images of a patient’s CAT scan while struggling to focus on the patient’s insides despite the chaos around me. Why was I even in the reception area? I’m a Mac girl and all radiology CDs in Italy are Windows-only.

My secretary Mariateresa was on the phone and her voice succeeded in penetrating my defenses. “Robertino needs his hepatitis B vaccine? No, I’m sorry, there’s no point in taking an appointment with the pediatrician, because that vaccine is unavailable at the moment. The Haemophilus influenza shot? Same story, I’m afraid.”

Overhearing this was so startling that I abandoned the CAT scan images and indulged my curiosity. “Not available?” I asked her. “How can that be? Those are obligatory vaccines. Kids can’t start school without them.” Mariateresa shrugged dismissively, “Of course, that’s exactly the point. Every fall parents scramble to get their kids vaccinated, and every fall there aren’t enough vaccines to go around. This year the missing ones are hepatitis and Haemophilus. Last year it was meningitis and measles-mumps-rubella.”

If you think about it, this kind of shortfall is inexcusable. Italy has universal population registries. It could easily calculate the number of necessary doses ahead of time. It doesn’t.

Italians have a saying about the marvels of Rome, Non basta una vita,” a lifetime isn’t enough to see them all. Well, the same goes for its foibles – and after 39 years here I’m still encountering new ones.

Generally speaking, Italy is a great country to buy medications. List prices trend low, and anyone with a National Health Service prescription pays zero, or close to it. Italian authorities can swing this by bargaining ruthlessly with drug companies over prices. Recently, California-based Gilead Pharmaceuticals agreed to accept $11,000 for each course of hepatitis C treatment with their new pill Epclusa. That may sound like a lot but it’s far lower than the $75,000 they get in the United States. If Gilead hadn’t agreed to cut the price of Epclusa, it wouldn’t have been included on the National Health Service formulary and no doctors in Italy would prescribe it.

Other times there’s only brand-name Tavor. You could once buy the equivalent of the tranquilizer Ativan only as generic lorazepam. Now, there’s only brand-name Tavor. One week the antibiotic metronidazole can be on pharmacy shelves only as Flagyl, the next week only as a generic, the week after that only as Deflamon, after which it’s unavailable for six months under any name. During the entire 2013-14 flu season neither of the two approved anti-influenza drugs, Tamiflu and Relenza, were available anywhere in Rome. Premarin, the classic hormone pill and vaginal cream, disappeared mysteriously from Italian pharmacies in 2009 and has yet to return. Yes, I know the U.S. runs low on a drug now and then, but here shortages are too commonplace to warrant new media mention, much less headlines.

Then there’s the matter of brand name musical chairs. The Italian companies that manufacture the meningitis and measles-mumps-rubella vaccines change every few years. For a decade I prescribed menopausal women a rub-it-in estrogen skin gel called Gelestra (Estrogel in the U.S.), but at the end of 2014 it became Ginaikos — same gel, same pharmaceutical company, same dose, same formulation, same color box, but pharmacies won’t dispense it unless my prescription bears the new name.

Almost all medications available in the U.S. or the UK are on the market here, plus some that are new and were approved here first and others left over from the Jurassic Era. But like so much else in Italy, getting hold of a specific drug can sometimes be a crapshoot. Don’t even consider having your supply shipped from home — it’s close to impossible to extricate prescription drugs from Italian customs, which is on the lookout for them.

Moral of the story: if you’re coming to Italy and there’s a medication you really, really need, bring along enough to last you for the duration.