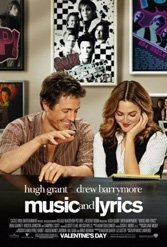 Marc Lawrence, the writer behind “Miss Congeniality 2” and “Two Weeks Notice,” penned, directed, and produced this lovely romantic comedy. The film opens with Alex Fletcher’s (Hugh Grant) spectacularly “80’s” hit video, “Pop Goes My Heart.” Grant is perfect as the has-been singer reduced to making a living by performing at high-school reunions and amusement parks to adoring, now 40-something, female fans. Fletcher is given the chance to appear with a popular teenage singer, Cora Corman, if only he can compose winning song and lyrics. When Sophie Fisher (Drew Barrymore) enters Fletcher’s life as his substitute “plant waterer” and unwittingly demonstrates her knack as a lyricist, Fletcher convinces her to help him try to create the winning song. Predictable ending but witty one-liners.

Stellar chemistry between Grant and Barrymore and all-around convincing performances give this film the potential to be the best light romantic comedy of the year. A real feel-good movie.