Murals in a fix 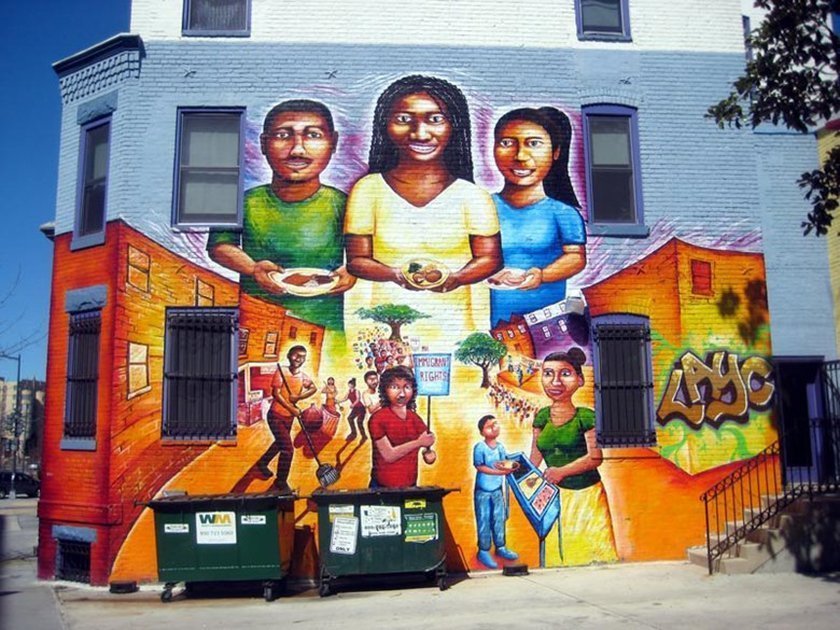 The art of murals is a window into the lives of the underrepresented.
W

ill Washington, D.C.’s vibrant street mural movement survive the efforts of local politicians and real estate developers to throttle and control it? After four decades of burgeoning growth — with dozens of prodigious and dazzling portraits of Black legends like Duke Ellington and Maya Angelou emblazoned on building walls across the city — the movement stands at a crossroads. In May 2020 the District of Columbia suspended its annual support for Murals DC, a project of the DC Commission on the Arts and Humanities, ostensibly due to the spread of COVID and the attendant shutdown of D.C. government operations. The government said the suspension would be temporary, but announced no new restart date. Virtually overnight, ten bold new murals projects already in development were placed on hold. Indefinitely.

Then suddenly the administration of Mayor Muriel Bowser, who’s running for reelection next June, reversed course. Just two months after suspending Murals DC, she authorized the installation of 51 new murals – the number celebrating the District’s long-standing campaign to become the 51st US state – to be painted and installed across the city on building walls in need of “graffiti abatement.” And she gave her public works department, normally uninvolved in murals construction, just a week to get the job done. 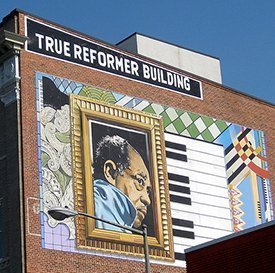 It was a stunning – and almost inexplicable – reversal. And for long-time veterans of the street murals movement, it came as a mixed blessing. Statehood for D.C. is a popular issue with District residents. For Black residents especially, the achievement of “home rule” means an end to the painful legacy of being treated as a stepchild of the U.S. Congress (a single subcommittee still draws up and approves the city’s budget). But D.C. muralists are accustomed to generating their own mural ideas, often collaborating with local business owners on the placement of their finished works. The government approves their applications, and may help fund the installations, but it generally does not tell mural artists what to paint, or why.

With the “51” project, D.C. public works officials decided to set the artistic agenda on a heretofore unknown scale (typically the city funds just 6-12 murals annually). And rather than solicit bids, city officials simply recruited supportive muralists and decided where their work would be installed. In the end, they even asked two government officials unknown to the local art world to design and paint several of the murals, just to meet its deadline. It was an unsettling precedent, especially with the Murals DC projects still on hold. Was the Bowser administration trying to hijack the grassroots murals movement?

Dr. Perry Frank, a long-time American Studies professor and director of DC Murals, a non-profit agency that advocates on behalf of street artists, says the Bowser administration’s close relationships with local real estate developers and her desire to consolidate power are shaping her entire approach to street art. In the short term, Bowser is moving to exploit the popularity of murals with Black residents – and their ability to mobilize voters – as a springboard to a precedent-setting third consecutive term. “She wants to tame and instrumentalize the movement, rather than let it develop from the grassroots as an authentic expression of the vision of the Black community,” Perry says. 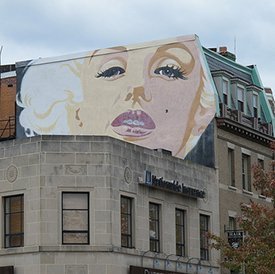 Similar concerns have been raised about Bowser’s decision in early 2021 to paint the streets surrounding DC government office buildings with the slogan “Black Lives Matter.” The slogan is spelled out in large yellow blocked letters that run for several hundred feet. (Is this indeed a “mural,” as Bowser suggests? “Not really. It’s actually a form of graffiti – but in this case, government approved graffiti,” says Frank, with a smile). Bowser has also spoken out publicly about the January 6 2021 riots at the U.S. Capitol and has positioned herself as a public antagonist to Donald Trump and his ambitions to regain the White House. These gestures have garnered the Mayor a lot of attention (international, as well as national) and have boosted her pre-election approval rating with D.C. residents. But many long-time D.C. muralists feel marginalized.

Frank sees other disturbing signs that Bowser’s agenda is largely her own. Earlier this year, she replaced the head of the DC Commission on the Arts and Humanities, Joy Austin, a long-time supporter of grassroots muralists, with several of her own cronies, none of them with an arts background but all tied to local business interests. And over the summer, the arts commission, backed by the administration, pressured Frank and noted murals artist Corey Stowers to tone down a retrospective murals exhibition they were co-curating at the city’s flagship Martin Luther King, Jr. Public Library. The exhibition traced the roots of the contemporary murals movement to the work of illegal street graffiti artists dating to the 1960s. Lawyers, citing legal concerns, said some of the graffiti art pieces were “inappropriate.”

“It wasn’t liability that concerned the Library, it was politics,” Frank says. It took the intervention of a high-level intermediary to smooth over ruffled feathers and to avert a stand-off that nearly derailed the exhibition. The show – already truncated in scope due to ongoing pandemic restrictions – eventually went on as planned. 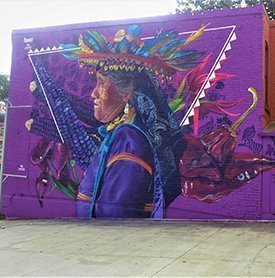 It’s doubtful that these tensions will ever be fully resolved. “But nor should they be,” Frank says. “Mural art, like all street art, reflects the daily lives and aspirations of African-Americans and other minorities struggling for self-expression in a society that too often silences and marginalizes them,” she says. “If a majority Black city like the District wants to be true to its own citizenry, it will have to tolerate some excesses on the margins,” she insists.

Another challenge D.C. muralists face is more practical: artistic preservation. Murals typically fade after a decade or more of being exposed to the elements and need to be repainted. Changes in city zoning requirements or other neighborhood pressures can sometimes force muralists to relocate their work to another open space, often at their own expense. And it’s not unheard of for careless or hostile city officials to paint over or remove an existing commissioned mural or less polished and informal street drawings, destroying authentic works of art.

Frank says she’s deeply concerned about the future of the D.C. murals movement. With more COVID threats looming, full government funding has yet to be restored. Moreover, as outside pressures grow, the movement threatens to become co-opted by political and commercial interests with agendas of their own. Frank hopes the fall-out from the pandemic provides fresh inspiration to muralists to challenge those same interests. Murals, she suggests, are increasingly “contested terrain.”

Ultimately, the future of D.C. mural art may well depend on its youth. Many of the city’s best-known muralists are now in their sixties and even seventies. Frank envisions a day when more of the city’s disenfranchised and underemployed Black teenagers learn to paint murals, with or without government support. There are tall abandoned buildings everywhere, she notes, and more to come. “The sky, quite literally, is the limit.”