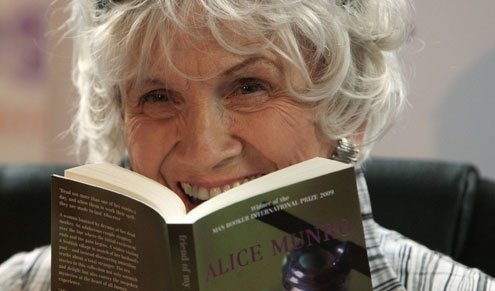 In Alice Munro’s stories, lack or loss has left something "missing."
A

Taken together, these 10 fictions and four “not quite stories” pinpoint the Canadian author’s long preoccupation with quite ordinary small-town characters. Hers are non-heroic heroes whose lives have been in some way shortchanged. Lack or loss has left something “missing.”

“Pride,” for example, is set during the pre- and post-World War II years in an unnamed southern Ontario town. The also unnamed hare-lipped narrator describes it as “any town.” Why, he asks, should he ever move? Another town would only mean facing the stare of strangers. Here, he thinks, his not quite successfully re-stitched lip and resulting odd voice are part of the scenery, hardly noticed any more.

This self-delusion is successful — until he runs into old high school acquaintance Ida. They begin to share casual, evening TV hours at his home. Years pass. Hard for older people to live alone, she notes. Why don’t we move in together? Everybody’ll see us as brother and sister.

He understands what she means: people would laugh at any more intimate suggestion. Because of his harelip. Of course he refuses. Pain and pride are blood cousins.

A curious feature of the collection is the disproportionate number of protagonists scarred by physical infirmity.

Miss Corrie Carlton in “Corrie” has a left foot twisted by childhood Polio. She’s been lamed. Dining with her rich father and his architect Howard Ritchie, she laughs as her father worries euphemistically that she may never find someone “on her level” to marry. These are courageous laughs.

Howard, in a picture-window marriage with two children, thinks: She limps, yes, but she’s also rich. Maybe she can marry “a fortune hunter.” Later, he speculates that her enforced spinsterhood may have “interesting” aspects. For the reader, Corrie’s passage from young woman to middle age is depressing account of the limited options available to a damaged woman.

Such poignant fictions don’t depend on sudden rolls of the great wheel of fortune. They examine the private dramas of everyday people. Characters limited by the hand life dealt them, and by the bleak, semi-rural byways they inhabit. Munro’s actors come to maturity in exactly the same years and geography she did. As an author, she evokes these settings as typical of the North American rural small town and its population. Shudder.

Yet she can make this very particular countryside quite credible. Her voice is personal and confiding. With convincing down-home simplicity, she carefully remembers people and places — just as our Grandmas did.

Munro townships and their environs do offer small joys. But those same joys are constrained. They assume conformity to a collectively understood “normal.”

“Eye,” the first of the four “not quite story” stories, involves a young girl’s dream of breaking free from a life trapped in small-minded conventions. Her own mother is a quintessential household rule-maker. “She tells me what to feel” — even which cereal brand is tastiest. When Sadie arrives as household help, Mother regrets she’s not a “better sort” of influence. Sadie is a small-time celebrity on a local radio station that “sophisticated” town folk ridicule. But the daughter finds her fun and upbeat, and devotedly follows her around the house. Sadie’s advice: “There’s nothing to be afraid of.”

When courageous Sadie is hit by a car and killed, rulebook mom insists they make a genteel funeral home visit, to gaze respectfully at dead Sadie in her casket. The girl is terrified at the prospect. But once forced to that goodbye look she suddenly sees Sadie’s eye open, just for her. A special message.

Since a girl very similar to young Alice Munro seems to have been the recipient, perhaps life can in fact offer special messages — ones capable of carrying someone beyond the limits of their particular time and place.

Not all Munro actors are so fortunate. Her men and women mostly play their cards with heroic resignation and stoic determination. A few enjoy the ever-fleeting experience of great happiness, and Munro is startlingly adept at quick-sketching those moments of joy. Some readers may wish she had graced her characters with more of them.