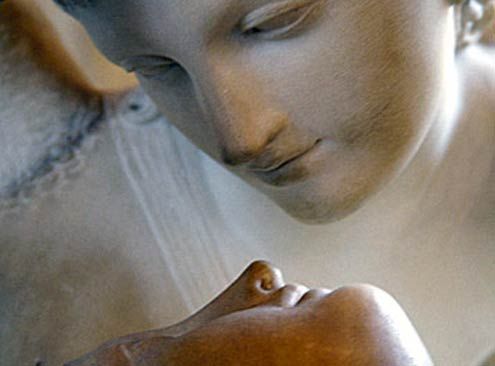 Aphrodite, Eros, and Pan... having fun.
I

thought it would be appropriate to start the first installment of Bella Figura — a monthly column with advice on love and relationships in the belpaese — with a few thoughts on our figures: specifically, on the link between Eros and food, appetite and libido. Why is it exactly that Italian men think a woman who eats a lot is better in bed? Sifting through my own mental archive of dates with il maschio italiano, one episode comes to mind. Danilo invited me to a fish restaurant in Palermo and skillfully navigated the menu to assemble a culinary lineup that would loom large in any Valentine’s diary: tuna carpaccio blanketed with sweet onions; pasta with swordfish, chopped mint and roasted red pepper; and calamaretti alla Malvasia, or baby squid stuffed with breadcrumbs, parsley, garlic, pecorino cheese and sautéed in Malvasia wine.

I devoured every last morsel with hungry eagerness until it occurred to me that although I was quenching my appetite, Danilo’s was growing.

“Mangia, mangia” he said sheepishly nudging his unfinished portion in my direction. His eyes were suddenly shiny with lust. I emphatically put my fork down to cork an imminent explosion of amorous intent. Too late. The pickup line I hoped to avoid was delivered anyway: Mi piace una donna alla quale piace mangiare. (“I like a woman who likes to eat.”)

A statement like that would cross any woman’s wires. Should you marry him on the spot or debrief him on the psychological threat cellulite poses to the female self-image? In Danilo’s case, and because I was quite obviously being force-fed into sexual submission, that was my last date. (Okay, I didn’t like him that much anyway.) Still, I felt compelled to explore that mysterious passageway that leads from the dining room to the bedroom.

Maybe it has to do with what we eat? Ancient mythology says that one day the phallus of the Heavens fell from the sky and landed in the sea (the womb of Mother Earth). Doing so, it fertilized the water and gave birth to a daughter named Aphrodite. Many fish were also born. The Goddess of Love was ushered to shore on a shell (a symbol of the Earth’s vulva) and wherever her feet touched ground, wondrous flowers and plants sprang to life. Those plants and herbs are “aphrodisiacs.” Seafood, especially shellfish, ranks exceptionally high on the aphrodisiac scale, which explains Danilo’s choice in restaurants. Truth is, almost all Italian foods — from risotto alla milanese to porcini mushrooms — kindle carnal desires, or so your waiter will tell you with a benevolent wink.

According to the Social Issues Research Centre, based in Oxford, England, and a study entitled “Food as Seduction: An Anthropological Perspective,” feeding is linked to courtship. (It cites the praying mantis whose mate becomes a source of nutrition but we don’t want to go there. Both food and sex are physically linked in the limbic system of the brain and to reproduce effectively, a female needs not only insemination but provisioning. “Thus, a male’s willingness to provide food becomes an important index of his suitability as a mate.” The study called it the male’s “resource accrual ability.”

To most women, RAA boils down to whether he picks up the restaurant tab.

I asked my American friend Fern (her name has been changed to ensure her safety), who is way past tallying RAA points, what her Italian husband of seven years thought about the relationship between sex and food. “Massimo was a real pasta and pomodoro type before he met me, but now he likes Indian food and those slimy Thai noodles and is generally more explorative,” she offered. “Every time he eats at his mother’s house he comes home with diarrhea.”

Interesting. But why do men think women who eat a lot are good in bed!? I called my wise friend Andrea whose trusted tool of seduction is handmade gnocchi con gorgonzola for an answer. “When a woman eats with a hearty appetite, it means she has accepted a vice. It means she likes to live and it means she is easy. And, obviously, anything that goes into the mouth evokes thoughts of oral sex.”

Baccalà (Stoccafisso) — Named after the god Bacchus (apparently his favorite dish), stewed codfish has always been associated with decadence.

Asparagus — The ancients considered asparagus a potent aphrodisiac that was downright dangerous if eaten in large quantities.

Artichoke — To some they are a symbol of the female sex (probably not meant to be taken kindheartedly) and to others they are proven aphrodisiacs.

Peperoncino — Your heart will skip a beat when you add peperoncino to your meal. Guaranteed.

Capers — Thanks to that seductive touch of spice you feel on your tongue when you bite into one, capers are part of Italy’s family of aphrodisiac foods.

Almonds — Almonds are a symbol of love, joy, health and fertility. Sugar-coated almonds, called confetti, are traditionally given to guests at Italian weddings.

Pizza — Believe it or not, a group of researchers in Chicago determined that the smell of pizza triggers our sexual impulses.

Gelato — Gelato is an aphrodisiac because, well, everyone loves it.