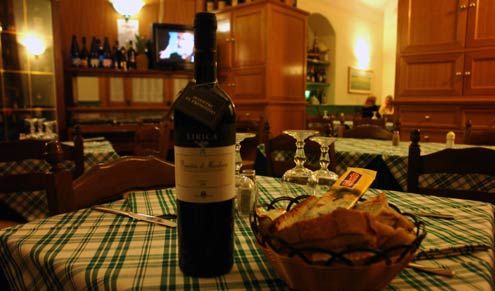 or me, the enjoyment of drinking wine is two-fold. First there’s the sinful pleasure I get while raising bicchiere to lips; the moment when my mouth hedonistically touches the rim of a glass and I bury my nose into the bowl and inhale deeply. It’s that split second when my tongue starts to register a wine’s magic aromas and tastes. The mix of these complexities etches a wine’s signature on my brain.

My second satisfaction comes from unravelling a wine’s history and background. I turn into Sherlock Holmes (I exchange my pipe for a cavatappo). I love investigating a good wine. I want to know who crafted it, which grapes were selected, and what steps the winemaker took toward creating it. Where was the wine made? How old are the vines? Was the soil light sand or packed clay? It’s anything and everything, including the Holy Grail of wine questions; where did the original grapevine emerge from?

Tracing a wine’s riddle back to its origins can produce revelation. A while back I received a bottle of red from Turley Wine Cellars, a California cult status Zinfandel with musky aromas, bursting with fruit and tobacco highlights. Exploring further, I learned that the wine was made from the same grape as Puglia’s own Primitivo. I also learned that Zinfandel is now the second most widely planted red in North America. The grape is thought to have made its way across the Atlantic in the 1820s by way of Vienna, passing through the hands of New York nurseryman, George Gibbs. They appeared in California for the first time in 1852, making them among Sonoma and Napa Valley’s oldest.

But this scrappy little grape’s story doesn’t end there. University of California/Davis Professor Carole Meredith has proved that Zinfandel/Primitivo is genetically identical to a practically extinct Croatian variety from coastal Dalmatia known as Crljenak Kactelansk (its okay, the Balkan consonants fool me, too).

Why is all this interesting?

Try both a $100 new world Cali-Zin and a Monday night pizza-perfect Primitivo and tell me if you think you’re tasting the same grape. Genetically, Meredith proved that both these full-bodied wines have the same DNA. Yet their taste differences underline how a vine’s terroir can influence what we detect in the glass. California Zinfandels have a new world style. Their texture is smooth.Winemakers work hard to produce jammy, bold reds heavy with aromas of raspberries and liquorice.

Puglia’s Primitivo is a different critter. It’s equally concentrated, dark-colored and full-bodied, yet very spicy and far more vegetal. It’s just as high in alcohol but easier on your portafoglio. The good ones, not those found in supermarket discount bins, are still a good value for money and can be as elegant as their California cousins.

In the low hills east of Taranto in Puglia, winemaker Mark Shannon of California and his partner Elvezia Sbalchiero of Friuli are bridging old world and new. Their “Fusione” is a Primitivo that affords a good balance between North American opulent fruit and Italian elegant structure. Using traditional cultivating techniques, their “A-Mano” ( a play on “hand-made”) is bottled using modern synthetic corks. But the grapes get only the rain the god’s intended. At €11 a bottle, they’re earthy wines, not fruity ones, with enduring hints of menthol, brown spices and black tea.

Shannon and Sbalchiero are not alone in producing snob-free, high-quality Primitivo. Several other producers, part of the Accademia dei Racemi, also Taranto-based, are moving the same direction. They’re making cost-effective Primitivos that are every bit as powerful as their North American counterparts. They’re out to show that Puglia wines are not only internationally interesting, but still remarkably affordable.

A dramatic Primitivo from one of the producers of this group is Felline Primitivo Di Manduria (2005; €8). An excellent value-for-money label, the wine is very aromatic. At first sniff, you get a heady mixture of dried fruit followed by layer upon layer of earth and chocolate. I like its rich mouth feel and spicy tannins. Like Shannon’s wine, Felline maintains its old world structuring while dabbling in the new and there is a strong layer of oak toastiness that is so popular with North American palets today.

I see wonderful possibilities for Puglia wines in the coming years. Perfect for simple meals — orecchiette col ragù or panzerotti — these top of the line vintages are some of Italy’s best kept secrets.

Buy a few bottles now and lay them down. You’ll thank me later.