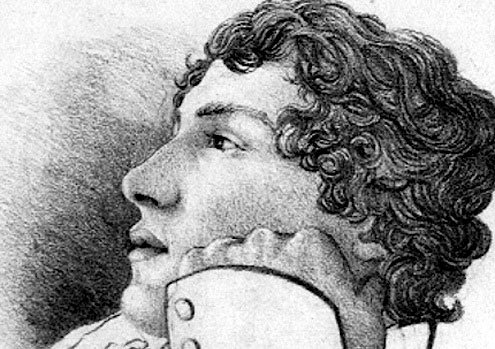 atherine Payling’s most ambitious interior decorating project is the meticulous refurbishing of a Piazza di Spagna room where an ailing Englishman languished for three months before dying in 1821.

“He died of consumption,” says Payling, curator of the Keats-Shelley Memorial House in Rome, “and by law everything in the room and all his clothes were burned in the piazza to stop the contagion spreading. None of the original furnishings survived.”

But Payling was determined to take the room back in time. “It helps to recreate the real feel,” she says.

Trawling through an antique shop near Campo de’ Fiori, she found a walnut letto a barca, or sleigh bed, that matched descriptions of the one that Keats had slept in. The bed was placed against a wall that overlooks a fireplace where Joseph Severn, Keats’s devoted friend, cooked meals when the two men didn’t order food from the nearby Trattoria della Lepre on Via Condotti. “Many people are actually moved to tears when they come in.”

The tiny museum at Piazza di Spagna, 26 is dedicated to the memory of Romantic poets Keats, John Shelley and Lord Byron — each one deeply and affectionately tied to Italy — and hosts some 25,000 visitors annually. Laura Bush has been there, so has Prince Charles. The VIP list is impressive: Bono, Bob Geldof, Richard Gere, Kevin Klein, Alec Guinness, Anthony Hecht, Seamus Heaney, Maurice Sendak, P.D. James, and Jean Cocteau.

Though the memorial is widely seen as a quintessentially English institution, it exists thanks to a group of enterprising American expatriates.

When Risorgimento Italy established Rome as its secular capital, ushering in a building boom that threatened to transform the historic site into a hotel, American poet Robert Underwood Johnson intervened to save it. He enlisted British diplomat James Rennell Rodd and a small group of literati friends to raise funds to buy the palazzo, which they did in 1906 at a cost $14,000 in cash and an $8,000 mortgage. “What happened,” says Payling, “was really rather wonderful.”

Payling is a former financial director of the Royal Philharmonic Orchestra who came to Rome in 1997. She received an MBE from Queen Elizabeth II in 2002 for efforts to foster improved relations between Britain and Italy.

Though both nations played key roles in securing the building — the Keats-Shelley Association was formed in 1903 — the driving force behind the memorial effort was Johnson, a Quaker. His picture now hangs prominently beside that of Rodd and Harry Nelson Gay, a Massachusetts history professor, who helped handle the complicated purchase.

Johnson’s connection to the property began with a visit to its then-occupants, two American women, Mrs. James Walcott Haslehurst, an American writer, and her mother. Johnson, editor of “Century” magazine, was curious to see where Keats had lived before his death but found the building dilapidated. The women told him they wanted to “resurrect this shrine” to the poet’s memory, but lacked the funds.

Three years of intense fundraising followed, mostly in the United States. The initial asking price for the house was $15,000, which soon crept to $21,000. Steel baron Andrew Carnegie was the single largest contributor, donating $2,000. Another $2,000 was collected at a special event organized at New York City’s Waldorf Hotel, with Mark Twain present. Other donors came from the New York Stock Exchange. British sponsors included the Tennyson family — relatives of the Romantic poet Alfred, Lord Tennyson — and publishers John Murray and A.S. Methuen.

When the sale was finally approved, museum donations began arriving — again, mostly from the United States. The walnut bookcases lining the library were the gift of American sponsors. American sculptor Moses Ezekiel presented the bust of Shelley that stands before the library windows, as well as a precious copy of a first edition of “The Revolt of Islam.” Gay donated his ample collection of literature on the Romantic poets.

During World War II, with Italy among the Axis powers and Nazi German officials concentrated in the city center, outdoor plaques designating the site were removed and the house closed. It was reopened, and the plaques restored, soon after Rome’s June 1944 liberation.

The Memorial House is currently celebrating a six-year centenary that began in 2003, marking the anniversary of the founding of the Keats-Shelley Memorial Association (which also has the guardianship of Keats’s grave in the Protestant Cemetery at Porta San Paolo). The event continues through 2009, the anniversary of the museum’s official opening. Commemorative events have already included a 2004 exhibition in collaboration with the American Academy in Rome that focused on the accomplishments of the Anglo-American community in Rome between 1890 and 1914.

Mortally ill, Keats was confined to the room for his final 90 days. He gazed up at a beamed Renaissance ceiling decorated with blue and white rosettes. Two tall windows frame the view he enjoyed on better days: Bernini’s splashing Barcaccia fountain and the voluptuous sweep of the Spanish Steps, where backpackers and camera-toting tourists have replaced peasant women from the Roman countryside who once congregated outside the building eager to offer their services as artists’ models.

Few know the Memorial House actually has a room for rent. A first floor apartment with an outside terrace, suitable for a single person or a couple, is available to rent for periods ranging from three days to six months.

About the Author: Margaret Stenhouse

Scotland-born Margaret Stenhouse has lived most of her life in Rome. She arrived in the early 1960s expecting to stay six months. But La Dolce Vita had other plans. After a checkered career of babysitting, teaching English and working as a tour guide, she returned to her former love — writing and journalism. She has published a book on the goddess Diana of Lake Nemi in the Castelli Romani hills, where she now lives. She is married with three sons, two grandchildren, a cat and an Abruzzo sheepdog.