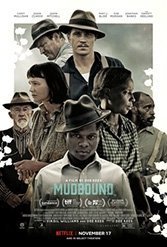 “Mudbound” opens with the McAllan brothers, hardscrabble white farmers eking out a living in the Mississippi Delta, burying their father. Struggling to get the coffin in the hole they’ve dug, Henry (Jason Clarke), the older brother and the owner of the land, asks the help of a black family approaching in a horse-drawn cart. Knowing glances are exchanged. The black patriarch, Hap Jackson (Rob Morgan), reluctantly agrees and adds, “My sons are not going to do this.”

The film returns to this scene at the end, and by then the audience knows what the glances and Hap’s comment mean. “See,” this well-worn filmic technique says to the audience, “see what you learned from our film?” Despite its didacticism, the scene works. The audience has learned a lot — about the interaction of poor whites and blacks in the Deep South of the 1940s, about their similar struggles, their intertwined lives, and their failure — with one poignant exception — to bond across racial lines.

“Mudbound” succeeds because of its highly literate script and gripping cinematography, both earning Academy Award nominations. Through heavy use of voice overs, writers Virgil Williams and Dee Rees (Rees also directed) allow white and black poor to narrate their lives and voice their concerns in a near-poetic language, capturing the literary feel of Hillary Jordan’s book, on which the script is based. From Hap Jackson: “What good is a deed?… [My ancestors] broke, tilled, thawed, planted, plucked, raised, burned, broke again… Died clawing at the hard, brown back that would never be theirs. All their deeds undone.”

It’s a stunning movie that should have received a Best Picture Oscar nomination.