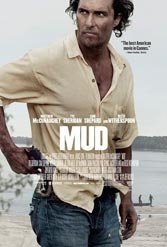 If Ben Affleck’s career is anything to go by, the jump of one-time rom-com staples into critical stardom — both as actors and directors — has become standard fare. Matthew McConaughey has long had something to prove, particularly after dumps such as “The Wedding Planner” (2001) and “Sahara” (2005). He impressed in “Lincoln Lawyer,” stunned in “Killer Joe,” and now, working with Jeff Nichols (“Shotgun Stories” and “Take Shelter”), he pulls off the finest performance of his career.

The film follows the exploits of two boys from the American South after they come across a mysterious brute hiding up a tree, affectionately known as “Mud” (McConaughey). When they discover he’s a murder fugitive waiting on his love Juniper (Reese Witherspoon), they decide to help him get a run-down boat back on the river. As they dart to town and back doing his bidding, they learn lessons about faith, fatherhood and the bitter truth of a cruel world.

It may sound a little duff and soppy, but this is a layered film. The coming-of-age of the boys, particularly Ellis (Tye Sheridan), finely interacts with the story’s peculiar dynamic. The menacing relationship between boys and man marks a childhood memory that will both enlarge and discombobulate their growing minds.

With all this going on, it’s easy to forget McConaughey’s machismo-laced performance. At first, he’s a comic-book idol to the boys, but this fantasy flutters away as he slowly reveals himself as the flawed anti-hero. Faced with the quandary of a violent past pitted against a warm spirit, Mud is a man of depth vitalized by the yodeling charm of a talented actor.

I wouldn’t go so far as to call this an indie classic, but it’s a nicely filmed crime drama that gently sizzles on the palate. It’s got the pace of a pressure cooker, pleading for patience to reach its syrupy sweet payoff. A payoff that just about merits the build-up, but the writing could have done with some tightening up in places.

Nonetheless, “Mud” is a swampy, sticky, slow-burner, and a spirited show of conviction from McConaughey to send those Oscar bells chiming.