Much ado about Mildred 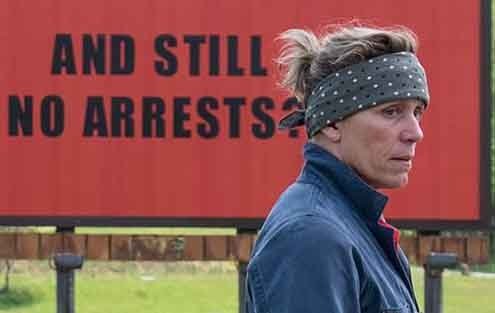 ildred (Frances McDormand) is a crusty, foul-mouthed, kick-’em-in the groin, 55-year old woman on a mission: justice for her teenage daughter, who has been kidnapped, raped, murdered, and buried. Mildred’s heard nothing from the police for seven months. She responds with three huge, red, country-road billboards, Burma-shave style, calling to account the police and their chief (Woody Harrelson). “Still No Arrests? How Come, Chief Willoughby?”

That’s all in the trailer, and critical moviegoers will wonder if it’s worthwhile sitting through two hours of more-of-the-same, with McDormand doing her thing, powerful as it is.

It is worthwhile, and it isn’t just more-of-the-same, though entertaining, vitriolic Mildred takes most of the film to settle down, and then just a bit. Rather than a one-dimensional McDormand vehicle, “Three Billboards” proves to be a surprisingly complex, psychological drama, as its protagonists come to terms with anger, childhood trauma, parental guilt, disfigurement, impending death, and, above all, the difficulty of knowing the truth, whether about the murder case or themselves.

Willoughby is the first surprise. He’s not the bad cop we’re expecting, but a thoughtful, intelligent, knowledgeable, introspective man, who understands civil rights. While undergoing personal and family problems of a high order, and troubled by Mildred’s billboards, he’s willing to explain to the victim’s mother why the case hasn’t been solved, though not why he’s failed to communicate with her. Another fine performance by Harrelson is tarnished only by the casting of his wife (Australian Abbie Cornish), who is too young for the role and can’t get her accent right, and by some mawkish scenes later in the film (watch for the picnic with the kids), punctuated by an all-too-perfect, smarmy Willoughby letter, which makes him come off as some version of Grand Master Yoda.

If the script doesn’t quite do right by Willoughby, it is otherwise superb, centering the film on the trials and transformations of Mildred and her equally angry, racist counterpart, police officer Dixon (an on-pitch performance by Sam Rockwell).

Though self-righteous (and, for the most part, justifiably so), Mildred is hardly perfect. She’s been hardened, by events and guilt, to the point of excess. Until the town dwarf (Peter Dinkage) sets her straight (“And you think I’m not a catch”), she assumes she’s above prejudice. Even when she goes too far, committing an act that comes from the far edge of her embittered personality, she fails to acknowledge what she’s become. Only in the last scene, on a vigilante mission with Dixon that seems both justified and crazed, does she start to question the validity of her righteousness.

The film revolves around Mildred, but Dixon may be its most compelling character. He’s the bad cop to Willoughby’s good cop: racist, impulsive, and violent. Interestingly, he shares two of those qualities with Mildred. Though his outrage does not arise from a moral sensibility as does hers, he functions here as an imperfect mirror image of Mildred and commits his own heinous act that parallels hers. That makes for two felonies, neither addressed by the authorities.

Dixon, too, is more than meets the eye. He may not be the brightest bulb in the box (his mother points out he was held back a year to make his police academy stint a long six years), but he’s a fan of classical music. Deep down he wants to be a detective, not just a grunt cop. He handles facial disfigurement with remarkable equanimity. He struggles with an over-bearing, hen-pecking, porch-sitting mother (a wonderfully comic Sandy Martin), who goads him to action. By the end of the film, he’s bonded with Mildred, his former nemesis (and alter ego) and, like her, come to understand just how difficult it is to know what’s true and to effect justice.

The film’s other pleasures are lesser, but real enough. It’s an Irish black comedy, transplanted to a small town in rural America. Anglo-Irish writer and director Martin McDonagh fills the movie with earthy, dirty language and violence. Appropriately, many of the minor characters are sharp-tongued and witty. Unlike most films, “Three Billboards” features a cast of secondary characters that elicit feelings in the viewer. Adding dimension to the story, besides the dwarf and Mama Dixon, are Red, the young billboard salesman (Caleb Landry Jones, “Get Out!”), Mildred’s son (always excellent Lucas Hedges, “Manchester by the Sea”), her ex-husband (a menacing John Hawkes) and his trophy girlfriend (a hilarious Samara Weaving, an Australian who gets the accent right).

Ebbing itself, like Winesburg, Ohio in Sherwood Anderson’s 1919 short story cycle, is a character in “Three Billboards,” portraying a small, dense community where everyone knows who everybody is and everything they’ve done. But do they, when they might not even know themselves?