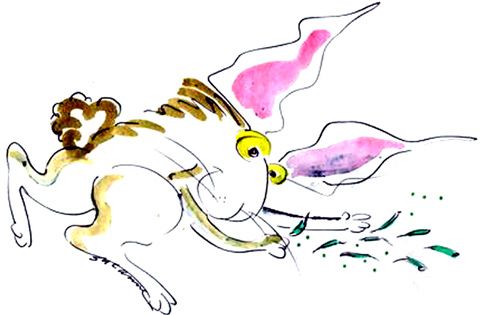 he large hare zigs and zags about, nose twitching, demonstrating its erratic rabbity behavior during a March mating season reminiscent of the pagan fertility rites with which it was first associated. But even the Mad Hatter isn’t as nutty as the myriad days in March in which everything from peanut butter to buzzards is celebrated.

I have pretty much X-ed out “Bubble Gum Week,” “Barbie’s Birthday,” “Potato Chip Day,” “Submarine Day” and “Something On A Stick Day,” preferring to concentrate on one that caught my attention, “National Frozen Food Month.”

For a purist in the kitchen, this is radical.

Let’s call it “How to Freeze Your Own and Fool Your Friends Month” instead. I know that TV dinners and frozen desserts have been American mainstays for decades. In Europe, TV ads for fish sticks, sofficini, and even frozen pasta dishes are on the rise.

I never imagined this would happen in Italy.

That said, cooking and freezing your own food appeals to me. I see it as lively competition with Sarah Lee. And it’ll taste better than commercially frozen food.

Putting aside my irrational scorn for the frozen food section of supermarkets, I must say that some commercial frozen vegetables taste as if they’d been zapped fresh from the vine or the field.

I recently served a dish of tender baby French haricots verts tossed with good olive oil and lemon and listened with amusement as guests remarked on how much work I must have put in snipping and cutting.

If you do feel inclined to snip and cut (and freeze) your own stuff, plan to spend an afternoon with the market’s bounty. Quickly parboil, in salted water, all the fagiolini, fave, and fresh cranberry beans your freezer drawer will hold. Put them in individual zip-locks, and pull them out when the season’s over and you need them best for pasta con fagioli or to dress up your €6-a-jar tuna.

I do the same with fresh artichokes in fall and spring. I peel back to the yellow leaves and trim the small, tender ones, cut them into quarters, drop the lot into boiling salted water for five minutes, cool and package.

This can help those of us addicted to artichokes — in soups, fried in olive oil or steamed with mint and wine — to bypass withdrawal. By the way, the commercial frozen hearts are perfect for pasta ai carciofi — in case you run out of fresh ones.

In deference to another wacky March celebration, “National Noodle Day,” I think we should whip up a pasta al forno and a couple of simple lasagne (artichokes, béchamel, parmesan; frutti di mare; plain ricotta, spinaci, pomodoro?) and let them keep the vegetables company.

Fresh pasta dough may also be frozen easily and brought out a few hours ahead of time to soften up. Many shops in Rome sell it. But why not use an inexpensive Imperia pasta roller and make it yourself in 10 minutes: 2 cups flour, 1/2 teaspoon salt, 2 eggs, and about 1/2 cup warm water, just enough to make a crumbly dough. Divide it into 4 flat cakes and run it through the Imperia’s large opening. Run it through increasingly smaller openings until the next-to-last one, then dust with flour, wrap in plastic wrap and freeze. The frozen dough, revived, isn’t bad at all and can make great lasagna.

When you pull first and second courses out of the freezer for a last-minute dinner, tip your hat to “Working Women’s Day.” Polish off the meal with homage to “National Poundcake Day.” One pound each of butter, flour, eggs, a pinch of salt and teaspoon of vanilla, baked at 350 in a buttered and floured cake pan provide two nice little future desserts. Pour a rich bitter chocolate sauce over the slices (melt any good chocolate with a little cream), and serve. Of course, it’s best to thaw all of the above before heating or serving, thus steering you clear of “Panic Day” and making it easier to be a true contributor to the March day called “Everything You Do Is Right!”