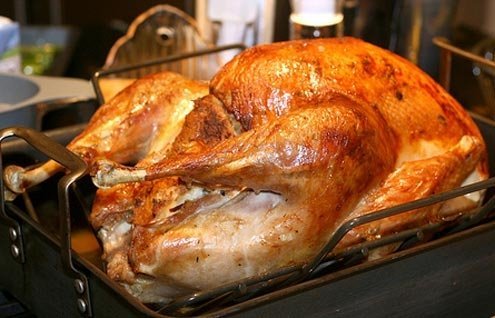 Truffle-turkey: An aroma all it's own.
M

aking a turkey dinner on a lark is no small task, as I found out recently. Three days before Thanksgiving I “appointed” designated cook. In typical family fashion, no one could decide if Sunday or Saturday would be right day for the family meal, understandable since Thanksgiving isn’t celebrated in Rome. Would kids be over their fevers? How would we all get together, bikes, cabs or walking?

When it all fell into place I got started with the menu. If you’re ever in Rome turkey-dinner pinch, whatever the holiday, here’s a snapshot of truffle-fueled resourcefulness (also known as desperation).

First I ordered the turkey from a small butcher shop (Via Balustrari, 3, near Campo de’ Fiori). The butcher spent more than a decade in London and spoke English, a plus (I admit he did try to finagle my mother’s corn bread dressing recipe). His bird ended up being the best I’ve ever eaten, and I’ve sampled a few over the years.

I had corn meal in the pantry but not enough. I decided to substitute white hominy grits, a gift from a wise friend. Hominy grits? Why not? It’s all corn anyway.

Did I have sage? Yes, hanging on the door of the kitchen was a year-old dried bouquet from my garden in France.

Were there spices for pumpkin pie in the pantry? Yes, but no pumpkin. Off I went to Campo, where venders sell peeled and sliced yellow pumpkin, ready to steam and purée. Easy as pie.

We’d recently taken a jaunt to Campoli Appennino, a hamlet east of Rome, where we’d picked up a couple of while truffles. I stuck them in a plastic bad with rice along with four raw eggs (in the shell!). Every time we opened the fridge an aroma of truffle permeated the room, my hair, our clothes and most of the house. The same aroma soon made its way into my cornbread mix. I had put a small piece of the truffle in my olive oil – which I use for practically everything I cook — and the cornbread pan got is share of truffle essence.

I then grabbed salted almonds used for aperitivi from the pantry, crushed them, and tossed them into the cornbread bowl. Celery, onions, parsley, and garlic are always on hand; in they went, all chopped and sautéed first in olive oil and butter.

The truffles had perfumed everything in the fridge that wasn’t airtight, including the eggs for the pumpkin filling. What the heck, in they went. Innovation, your name is kitchen.

The house now reeked of truffle. The mashed potato and carrot purée got truffle-scented milk and butter (you’ve never lived until you’ve had truffle flavored milk on your All-Bran).

My mother’s secret dressing ingredient was chili powder. But it’s not east to find without traveling a few clicks. I did have ground cumin and Italian chili, the basis for all chili mixes. In they went, along with a pinch of coriander that I keep around for curries.

It was time to stuff. I used the two “truffle-tainted” eggs for the cornbread mix that went into the bird, when then went into the over. The chef celebrated with traditional Wild Turkey bourbon milk punch.

My step-grandson stayed for a sleepover and truffle-scented pancakes were the morning’s surprise. As always, I overshot a little on the pancakes. I used the leftover batter (with an assist from a couple of potent eggs, a pinch of salt and a splash of Grand Marnier) to make truffle dessert crepes that followed the traditional turkey soup.

I love cooking with found objects. In this case I didn’t have to buy anything except turkey, pumpkin and Mr. Truffle, with the latter doing most all of the work.