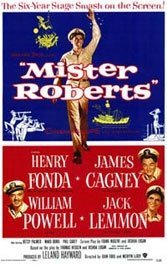 Beginning in 1948, Henry Fonda returned to star as Mr. Roberts in the Tony Award-winning Broadway hit. Absent from the stage for than a decade, he returned to do what he did best, playing the wry conciliator. The film version is an underrated tale about big and little mischief on the fringes of wartime.

Fonda is Lt. Doug Roberts, a junior officer on the USS Reluctant, a re-supply vessel going nowhere fast (“…delivering more toothpaste and toilet paper than any other Navy cargo ship in the safe area of the Pacific,” says Roberts.) The war is over in Europe and ending in the Pacific. The frustrated sailors are not so much reluctant as left out, indulging their irrelevance. But stickler Captain Morton (James Cagney) runs his ship as if he’d been given command of the Bounty.

In between the griping, goofy crew and Morton is eager-to-be-transferred Roberts, charged with the bittersweet task of keeping tempers at a low boil while ruing his own disillusionment at having failed to contribute to the war effort. The ennui gets a comic dimension thanks to boastful Ensign Pulver (a delightful Jack Lemmon), a prankster who invents personal heroics and gains heft as the story unfolds.

But this Fonda’s movie, his Jimmy Stewart turn, his ode to the common man. Doc (the ship’s doctor played by William Powell, in his final role) tries comforting the frustrated Roberts (“I’m sick and tired of being a lousy spectator.)

Yet these men are spectators. And spectators are the nucleus of war, without which there are no front lines. The charms of insignificance is at times more compelling the fierce impositions of heroism. Roberts eventually gets his transfer, of course, and the result is sentimentally predictable.

John Ford, the director of record, argued bitterly with Fonda and left the set, Mervin LeRpy taking over. The rift doesn’t show. Fonda’s infinitely decent Roberts is a creature of beauty.