Mr. Nolan, we have a problem 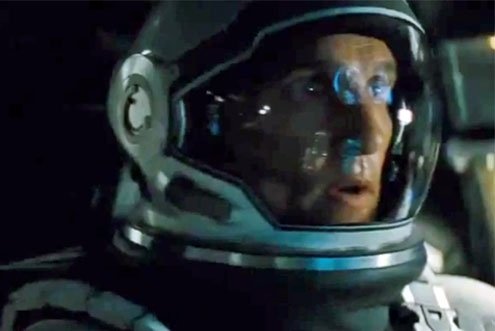 ive an ambitious and successful director free rein to run riot through a fast-food emporium of time-space speculation, supporting him with galactic wads of studio cash, and the outcome is usually masterful or disastrous, with painfully little wiggle room. After striking some brilliant if erratic notes in 2010’s “Inception,” it’s Christopher Nolan’s turn to pay the piper. And it’s a steep bill. His latest foray is a massively overblown epic about (among other things) the end of the world, empathy, human frailty, environmental catastrophe, black holes, family love and time warps.

Cutting to chase, something Nolan is unable to do over the course of nearly three hours, ex-astronaut pilot and widower Cooper (Matthew McConaughey, in full mumble-mode) is a reluctant farmer on a future earth savaged by blight and 1930s-like dust storms. Cities are gone; food is a priority; the end is near. He has a beloved daughter Murphy, a son Tom, a staid father-in-law, and a nostalgia for a time when “explorers, pioneers, not caretakers” ran the earth. Still, he’s mostly just Dad.

But lo and behold, feisty “Murph” has a mystical streak — think early M. Night Shyamalan — and her field of dream visions (baseball included) land Cooper back in the company of his old NASA buddies, who, with tech out and farming in, are left to scheme from the one-time NORAD bunker. It seems the old new NASA, a cabal of a half-dozen eccentrics led by Dylan Thomas-quoting physicist Professor John Brand (Michael Caine) and his scientist daughter Amelia (one-gear Anne Hathaway), has been secretly concocting missions into a wormhole out past Saturn with the save-the-species aim of finding habitable planets in other galaxies.

But Nolan is so caught up in the details of his effects (and a fraught story-line clearly awe of itself) that he fails to recognize let alone reconcile the gap between his parallel stories — the space explorers seeking human ports in the void and hope-voided survivors of a dying planet. The result is an often beautiful but deeply confused and maudlin piece of filmmaking that borrows (if not steals) from “2001: A Space Odyssey,” “Silent Running,” and a dozen more modest but better films in between. Even Philip Glass (whose 1982 “Koyaanisqatsi” soundtrack composer Hans Zimmer riffs on) is shameless fair game for the eclectic Nolan and his scriptwriting partner Jonathan, who together go to extraordinary lengths to prove John Lennon’s all you need is love theorem (with an assist from Einstein and latter day theoretical physics groupie Kip Thorne).

At no time is it entirely clear if Nolan knows exactly what he has in mind to make, whether a metaphysical space epic or a girl-is-mother-to-the-man drama about family values and faraway daddies, a Steven Spielberg specialty. Abundant ambition is betrayed by non-existent restraint and poor editing, with Nolan’s near-cult status probably allowing him to do without the latter. Even McConaughey, increasingly skeptical in his body language, does little more than go through motions. Pity, because somewhere here is a hint of a coherent film, and the means to get there, but this deeply pretentious, musically bloated and ultimately tedious bit of business isn’t that film.