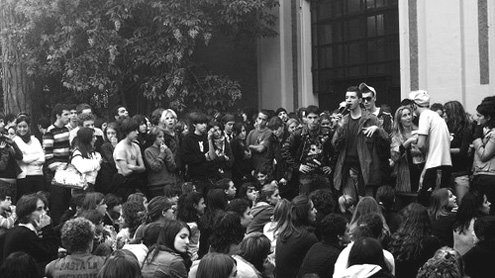 Protests rocked Italy for much of October and November.
I

don’t know if times have changed or if it’s just that I’m getting older but recent violent student protests in Rome have left me thinking twice about having children anytime soon. I can’t help but think the situation would have been very different in the United States.

Don’t get me wrong; there are Italian “family values” that I treasure, including Sunday family lunches and the strong mother-child bond. But Italian kids, at least those in Rome, make me wonder what happens to those values over time. To the point that I say to myself, “Oh God, could that be my kid one day?”

I’ll be honest; I couldn’t grasp the protests themselves. In fairness, most Americans under 35 are just not used to student activism. They don’t get it growing up. I’m not passing judgment. This is not 1968.

Italy is different. I can’t remember ever hearing about kids in my hometown schools marching through the streets to protest new federal laws (the ongoing Rome protests oppose new legislation that slashes public school and university budgets).

Today’s American kids just don’t do that. They’re too busy with video games and sports. Protests, when they occur, are left to adults. Will someone explain to me how 12- and 13-year-old Italian students can occupy and take control of a school while police sit back and do nothing?

Back in my day I was scared to death of my school principal, Mr. Moorehouse. Apart from the fact that plotting high school takeovers wasn’t my strong point, any subversion of mine would have been discovered and I would have ended up in Mr. Moorehouse’s office. The police wouldn’t have needed to make a move. He would have expelled me on the spot. End of story. My parents would have furnished the home punishment. Parents can be excellent deterrents.

That may be where the real problem is in Italy. Italian parents can’t seem to grasp the nature of punishment and discipline. They’re softies. Again, while it’s great to show your kids affection, a little tough love from time to time wouldn’t hurt. Rules are rules. Kids need them. Otherwise they grow up thinking they own the world and can’t fully differentiate between right and wrong.

I recently overheard a Roman woman telling a friend, “Oh, yes my daughter is participating in the protests too. She is even sleeping at school. I think it’s good that she’s standing up for her rights.”

Sleeping at school? Is she nuts?

That would have gone over really well with my mom. In high school she barely let me spend the night at my friend’s house. I have my doubts that an occupied school would have cut it. “Rights? I’ll show you rights,” I can imagine her saying.

And you know something? I may not have liked the rules at the time, and I broke some (don’t hate me, mom!), but I learned something from being reined in. You may not understand what rules mean at 15, but at 30 you can thank your mom for having imposed them.

If my mom had let me be a free spirit — and by free spirit I mean making up the rules as I went along — who knows what kind of adult I would have turned out to be? Maybe an angry one. Possibly a screwed up one. Her rules taught me to interact with others and understand why they choose to interact differently. I wasn’t the center of the universe.

So here’s a word for Roman parents: Your kids aren’t learning anything from sleeping at school and participating in street protests. What they’re doing is blocking a bus route. Mine.