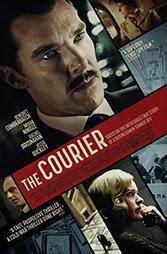 ar from the usual take on the Cuban Missile Crisis, “The Courier” seems worlds away from the tense drama of the White House Oval Office depicted in the 2000 film, “Thirteen Days.”

Based on true events, the film’s plot relies less on the pulsating friction between super-powered politicians and more on the unassuming collaboration uniting two responsible citizens. This (mostly) engaging spy thriller attempts to answer the question, “What might an ordinary person do so that their government doesn’t bring about nuclear devastation?”

Cumberbatch plays Greville Wynne, a respected British businessman selling industrial equipment in countries all over Cold War Europe. In an attempt to counter the increasing Soviet presence in Cuba, American and British intelligence agencies team up to recruit Wynne to begin doing business in Moscow so he can make contact with Oleg Penkovsky (Ninidze) and secretly carry valuable messages back to London.

Penkovsky, working under the code name Ironbark, is a Soviet colonel and government committee leader charged with gathering intelligence on the West. Although he purports to remain loyal to State interests, Penkovsky acts clandestinely to undermine the extreme threats being plotted by Khrushchev’s Kremlin.

Assured that he is not being asked to assume risks as a spy, Wynne’s relationship with Penkovsky soon becomes personal, their lives suddenly interconnected in perilous ways that were not part of the original deal.

As Penkovsky shares what ultimately results in thousands of photographs of documents depicting Soviet military strategy, their collusion forces them to recognize they’ve come to depend on each other not only for their own survival, but for the well-being of innocent people all over the world.

What might be harder than deceiving an enemy which might actually kill you? Convincingly portraying someone trying to do so on film. Nonetheless, Cumberbatch adequately projects the signature confidence and charm that comes with sales experience. At times, though, the nuances underlying his peculiar facial expressions keep others a little off-kilter, if not somewhat at a distance. For his part, Ninidze portrays Penkovsky with the impassive look of somebody that has had to live his life under constant scrutiny.

Still, the urgency and emotional depth of the actors’ steady performances, even in the portrayal of characters based on actual people, often gets lost in the technical efficiency of the film’s overall telling under Cooke’s well-versed theatrical eye. Too bad. Heroes deserve better.