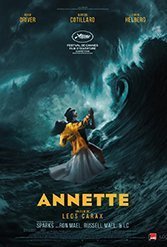 “Annette” is a courageous attempt to re-imagine the typical movie musical to create something that — while it might share kinship with the likes of “Oklahoma” — has little in common with rollicking, mid-20th century musical. There’s a reason for this fork in the road. Both the screenplay and the songs are the work of the rock-pop duo “Sparks,” Ron and Russell Mael, who also wrote the screenplay.  The Maels, a pair of brothers from LA, have been around since the 1970s, Ron on keyboards and Russell on vocals, acquiring a loyal fan base that’s endured over the decades.

Given such paternity, it’s no wonder the film’s rhythms, vocals, and orchestrations reflects the music the brothers have embraced since they began their careers in the 1970s. In typical fashion (for them), they at times strip the music down to rudimentary so that at the score sometimes seems to be less in the spirit of traditional lyrical music-making than that of heaping together sounds and noises. That, in fact, is their intention, or part of it. The stripping down process is a way of gripping the audience, and it works.

In a clever ploy, the film story-line is preceded by a public announcement demanding audience compliance with a series of rules. The audience must remain utterly silent. “Breathing,” says a voice, “will not be tolerated during the show.” It’s another shrewd way of securing audience attention.

But before viewers can even respond, they’re swept into the opening tune,  “So May We Start,” sung by the entire  cast and crew while marching arm-in- arm.

After the fanfare subsides, actor Adam Driver is abruptly introduced into the role of Henry, a dark and belligerent but successful comedian who prospers while heaping disdain on his adoring fans. Enter Anna (Marion Cotillard), a virtuous and beloved opera singer who is Henry’s opposite number (and the woman Harry is obsessed with).

Their acts are polar opposites. His is aptly titled “The Ape of God,” while she performs “The Forest.” The two are juxtaposed to show the distinction between high and low art, a chasm as wide as the one between their characters. But opposites attract.

Though it’s brief, a typical and tender (and very public) love story unfolds in song, only to soon begin cracking. At this juncture, Henry and Ann have a child, Annette, a child derived in every way from her parents’ love of the stage. Annette’s arrival might be imagined as the catalyst for reconciliation, but not here, not in a movie directed by veteran Frenchman Leos Carax, who adores hopeless love and has made impossible love the centerpiece of several movies.

Some of these plots are very much in the tradition of American musicals. In fact, “Annette” smartly attempts not to dismantle the genre but to redirect it. No happy dancing into the sunset.

Too often the film can seem like an itemized checklist, like a lab experiment in which one protocol follows another. But that doesn’t make the effort, albeit shaky, any less bold.

Director Carax and the Mael brothers got theirs at the Cannes Film Festival, Carax named top director while the Maels reaped musical honors, not bad for a musical that isn’t a musical but is a musical, since the men who wrote it have spent a lifetime doing one thing and one thing only: singing.