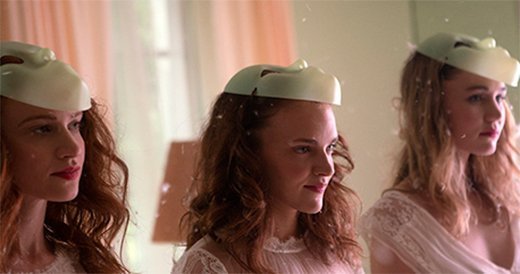 Three childhood friends enjoying a reunion? Not quite.
I

n Mitzi Pierone’s sorcery and female-brokered horror, two on-the-lam city drug dealers — Petula (Imogen Waterhouse) and Tilda (Sasha Hay) — high-tail it to the home of their childhood “friend” Daphne (Madeline Brewer), now a mad-hatter Vermont heiress who once amused herself by getting the troika to play a self-serving twist on “Doctor,” in which the prim Daphne always played “Mother” and gave orders the others had to obey.

Enter the criminal interlopers, “mermaids on crack”, less interested in going down memory lane than in recouping lost drug revenues by raiding Daphne’s safe — that, at least, is how things seem.

But “Doctor”-game obsessed Daphne (“Rule number 1, everyone must play…”) has decidedly different ideas about the reunion, and soon the story gets an ample dose of surrealism, sex, and gore, the latter triggered by a snooping male cop who knew all three girls as devil-in-disguise kids and still suspects Daphne had something to do with the death of her parents.

Peirone’s wildly kinetic first feature is driven by a bevy of warped Freudian riffs on maternal neuroses, role-playing, and jaded innocence, much of the action set to lyric opera (“Figaro”). This gives the goings-on inside the decaying mansion a richly demented 19th-century feel (costumes included). Drug dealers and madwoman become a composite of jealously wicked witches, one of them out to make good on revenge. It turns out Daphne is barren as a result of a not-quite-accidental fall from the threesome’s tree-house refuge. Now, the mansion is both tree house and dollhouse, and Daphne eager to rearrange time, space and outcomes to her vengeful liking. 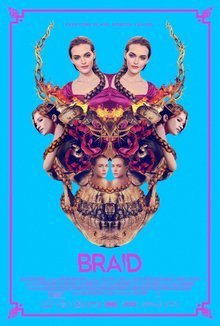 Messy maternal instincts go for a wild ride in “Braid.”

Throughout, the camera is riveted on the women, who seem at times to become three sides of one ferociously imaginative, if tormented, creation.

Peirone makes the escalating lunacy all the more engaging by coaxing her players into showing off their girlish, wannabe adult sides, thus mixing child mischief with inescapably mature evil.

Horror flick mainstays are everywhere — a creepy house, a secret chest, a telltale mirror, and a ritualistic dismemberment. But it’s the ominously dainty role-playing — Petula is the male doctor; Tilda, Daphne’s daughter — that works to ramp up the sexual tension. That’s because women and only women run this show, and they do so with uniquely willful and cruel deceit no male bravado could match.

This is girlie hell inside a condom that once torn open dribbles the darkest possible interpretation of everlasting childhood friendship.

The film’s one male figure, the sleuthing Detective Siegel, lasts only as long as the girls wish him to (“Rule number 2, no outsiders allowed”).

It’s worth noting that some of the best and most creative filmmaking these days is emerging from horror (witness “A Quiet Place,” “Hereditary,” and “Get Out”). The genre seems to liberate younger directors and give them access to psychological hinterlands. “Braid” might fit nicely on HBO or Netflix, both of which offer safe haven for cliché-busting material. At 84 minutes, it’s perfect TV material (Brewster starred in Netflix’s 2018 horror effort “Cam”).

That said, the film’s oxygen is its cinematography, the camera settling on the three women together in a doll house-life sized bed, a scene of beauty and allegorical potency. Behold the beauty of twisted sisterhood.

Thomas Wolfe may have been wrong. Maybe you can go home again. Or maybe you’re destined to. But there’s hell to pay. Here’s a little keeper that passes horror’s test with an A+.