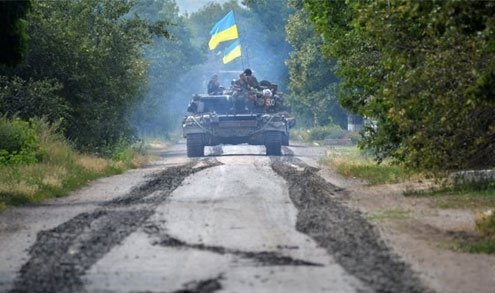 ome contemporary historians have used the 100th anniversary of World War I as an opportunity to compare the volatile tone of evolving events in Ukraine to those that unfolded before the 1914 Guns of August.

The appropriateness of the occasion is not in doubt, nor, mostly, is the earnestness of the comparison. Since the downing of a Malaysian airliner by pro-Russian rebels months after Russia’s annexation of Crimea, Ukraine’s vicissitudes have acquired a “Lusitania”/Sudetenland-like feel that not even the word ominous adequately covers.

The real dispute, however, is over sanctions. So far Russia’s Western rivals have opted to admonish it verbally and penalize it economically, which has already set off an unequal but opposite response. This makes historians uneasy for two reasons: big powers led by outsized men understand only meaty moves. Closing Russia’s financial spigots will only salt rage and exasperation. A snubbed and increasingly self-righteous Russia, they argue, is now more likely to use the slightest pretext to stage a full-scale invasion of Ukraine.

The implicit alternative is military: sending Western aid, weapons and troops, to assist Ukraine in quelling its long-simmering secessionist revolt (Ukraine has been bitterly divided between Ukrainian west and Russian east for decades, its so-called Orange Revolution in 2004 partly the product of the division).

“The fundamental asymmetry in the Ukrainian crisis,” Scottish historian Niall Ferguson wrote recently, “is that the Kremlin is able and willing to use military force; Europeans — and Americans, for that matter — want to go no further than economic sanctions.”

Righting that asymmetry obviously demands fighting fire with fire. This option would give President Vladimir Putin a clearer idea of the risks at hand, just as Nikita Khrushchev, confronted with a blockade during Cuban Missile Crisis of 1962, backed off at the last instant rather than chancing the alternative. For Ferguson, replying to Russia requires “a better answer to the balance of conventional forces — and the balance of the will to use them.”

Less cryptically, that would mean creation of some kind Euro-American military alliance under the NATO umbrella to “rescue” if not re-compact Ukraine, whose own military has its limits. That choice would transform the act of invading eastern Ukraine into an act of war against the West, which it already is de facto.

It is a strategic challenge that makes sense in war games terms, but is often advanced without a nuanced understanding of Russian nationalism. Putin is not a pre-world war figure. He is not like insecure Kaiser Wilhelm II or neophyte Adolf Hitler, both of whom capitulated often to hysteria. He has ruled Russia for 15 years in traditional Russian alpha male fashion, but not rashly. His wistfulness for Soviet-era if not czarist borders (imperial Russia founded the Crimean capital of Sevastopol) has been rhetorical.

Until six months ago, he was an established (if morally inconvenient figure) on the world stage and a leader who put up less resistance than France when the United States stormed toward it 2004 invasion of Iraq. At the time, Iraq was sovereign state led by a brutal secular dictator (ironically, it is now a bloodied country coming apart at the seams). Putin remained on the sidelines because he had his own unfinished business with Islamic insurgencies in Chechnya and the Caucuses, and also because he recognized the need for a cathartic avenging of the home wound inflicted by the 9/11 attackers.

Until Ukraine’s flare-up, his primary governing goals were threefold: regional self-aggrandizement, securing agreements with China over natural resources, and establishing a customs union (including Ukraine) to keep former Soviet states from straying too far West (as Poland, the Czech Republic and Hungary already have).

His domestic tyranny unhinged few academics — left to human rights groups — until Ukraine’s inner revolt grew in size and speed, and Moscow signed on. Then came the downing of a Malaysian airliner, probably by trigger-happy Russian-leaning rebels, which all but forced the West jump to attention in defense of civilized values and the rule of law (the Syrian gas attack generated similar outcries).

Suddenly, sanctions seemed too meek. After all, writes Ferguson, “A century ago the overwhelming majority of Britons supported the government’s argument that the German violation of Belgian neutrality was a legitimate casus belli.”

True. But Germany and Belgium were always separate and distinct states, culturally and linguistically, not quite the case with Russia and Ukraine.

More to the point, no country on the planet takes the concept of the territorial motherland more seriously than Russia. Nor has any suffered more bitterly as a result of betrayals and invasions. Russia’s human losses in both world wars trump those of the United States and Europe combined — the figure is close to 50 million (Stalinist genocides not factored in). It defeated Hitler’s advances against all odds, still a fundamental piece of Russian folklore and a cornerstone of its special supranational identity. Putin, a viciously eccentric but devoted patriot, has milked both. His backing of Ukraine’s rebels may be opportunistic but it is not casual. Russia is more wedded than even than U.S. to layers of sentimental patriotism. It irrationally closes ranks in the vein of another threatened state, Israel.

For those who see Russia only in terms of czars, Communists and democratic dictators, it’s important to remember that it has endured that which Britain and the U.S. have not: invasion and occupation. The genetics of that reality are inaccessible to Anglo-Saxon historians, since it defies intellectual concepts.

Challenging such paranoia to come out into the open is a fool’s errand, particularly on the motherland’s doorstep. If challenged directly, right or wrong aside, Russia will step forward against all reason and odds, which is why a 21st-century variant on world war isn’t out of the question.

Russia may yet tempt fate and move to invade Ukraine, or at the very least occupy its Russo-friendly eastern half. That would push the West into an awful quandary. But such a choice will not be forestalled by sending soldiers to that already imperiled border. Instead, a Russian-American summit, out of vogue these days, might buy some time. The sides need only to talk, not agree or smile, a protocol the mortal enemies adopted often in the Soviet era.

Though the West cannot accept it, their rule of law objections are not in Russia’s operation sensibility. This is a family squabble between an independent state that was until 25 years ago a part of Russia, and its one-time masters, with both sides passionate about their obligations and neither side guiltless about where things stand today.