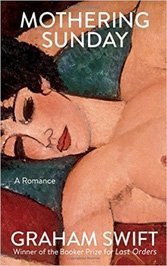 There are times when a slice of pie is more nourishing than the whole of a cake. This is fine pie indeed. Now well into her 90s, Jane “Jay” Fairchild, once a foundling child, then a maid and shop-girl, and finally a successful British author, pauses to reminisce about a romantic day nearly a century before, a “complexion-changing moment.” That reminiscence, the one-fell-swoop story not only of a 22-year-old woman’s coming of age just after World War I but also of a maidservant who eventually transcended class, is nurtured by the acuity of its narrator.

The setting is a manor house, Beechwood, where orphan Jane helps keep house, and Upleigh, where once and only once, on Mother’s Day, Mothering Sunday, she kept bed with “the aloof and splendid” James Sheringham, 23, a golden boy, among the few landed gentry boys to make it through the male war’s generational slaughter — “Youth — great swathes of it —was just what the century had lost,” says Jane. The affair between Jane and James, about to marry chic Emma Hobday, is the substance of the recollection, as are Jane’s room-by-room details of a mannered age beginning to come irrevocably undone, sexual shifting with it (with Jane learning the tricks of the “Dutch Cap,” an early diaphragm). Swift’s prose is luscious as always, his one post-coital scene — James and Jane in the “perfect politics of nakedness” — composed like a daguerreotype: “Their cigarettes, now and then merely lodged vertically in their lips, were like miniature companion chimneys.”) Swift’s Jane is, to paraphrase Shakespeare, a snapper up of well-considered trifles — she reads, she pays attention; she keeps to her station while absorbing the details of life around her.

So it is that we’re listening to the memories of a successful author, a lover of Conrad (“… all writers are secret agents…”), whose 19 postwar novels would bring her fame and attention. Swift’s conceit is small but flawless. His inhabiting of Jane, both young and old, is a tribute both to immense moral generosity. Nothing fancy here. Just a once-upon-a-time romance that conjures Britain’s still-landed 1920s (March 30, 1924 specifically), using the ill-fated James to open Jane’s horizons. This is a romance of the lost generation, of manners, motorcars, secrets, and secret staining. It is also a book about writers and writing, unspoken fact and infinite fiction, a story that is wise and true, if not graced.