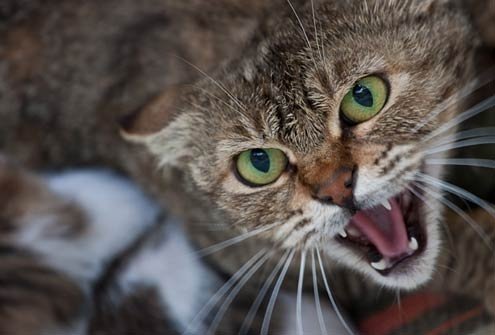 A mother's "do not disturb" signs sometimes needs extra emphasis.
I

pulled the tail of the cat and it replied with a quick right hook that pawed a deep gash into my palm from which blood bubbled up like a gusher. I wailed and slapped the cat. It hissed and darted away. I stormed upstairs and redoubled my wailing for dramatic effect.

But the United Nations that was my parents offered little sympathy, let alone support troops. They saw me, rightly I guess, as a yelping rascal eager to turn the tables on the aggrieved. I was, said my father, a little Hitler, and the cats my Sudetenland. “The cats are not the Czechs!” he boomed.

I was eight and the analogy left me perplexed. If the Czechs (the who?) were the cats then the Czechs were only getting what they deserved. After all, I was boy, owner of cats, vassal of the basement, and anointed prince of mischief; cats should sit still and endure me.

No, insisted my father (after the wartime analogies), a cat was a living creature, half-feral (what?), which disliked having its tail pulled, just as I wouldn’t want cold water poured over my head, or have my elbow twisted.

My French-accented mother, whose English had a steam whistle lilt, made it worse by calling the cats — we had seven — eenocent pets that shouldn’t have to endure my malisse, which I mistook for the word “mouse,” making me wonder whether the cats actually saw me as a mouse, something they could trifle with.

My wound bandaged and unmoved by Hitler, Czechoslovakia, and my life a mouse, I later returned to the basement determined to wreak further havoc.

Our basement was a square cookie of moist cement with a latticework of joists along which electrical wires ran. There was a sink, a washer, a fuse box, and a tiny (scary) guest room filled with cobwebs. The cats had a basket and a litter-box, their hotel lobby of sorts, but mostly they lived in the nooks and crannies of the rafters, scattering whenever I walked down the squeaky steps.

The mother cat, Mona, had just had her latest litter, pushing our exaggerated house haul from seven to 11. The “cutlets,” not kittens to me, lay like bleating goat-frogs in a small square box tufted with cloth, some of it bloody. It smelled like hay and dung. I decided revenge was best exacted by playing a prank on the “cutlets,” maybe by catching grasshoppers and tossing them in their direction, hoping to get Mona’s attention, angering her, daring her. As an only child, the dynamics of family life depended on a simple, Lance Armstrong-like principle: I was alone and came first, always. My Sun King view of the world also included that cats defer to it.

Now, years on, I would have embargoed myself, or wished the imposition of UN peacekeepers. But my parents were too busy quarreling to see the need to intervene. “You take care of the cats since you wanted pets,” my father said. “But remember, they are not to be trifled with.” “Trifling” made about much sense as Czechoslovakia, but I agreed, nodding and smiling vigorously to keep my scheming from the limelight.

Carefully, I collected several weary grasshoppers, most trapped in corners — once they got in they were trapped — and cupped them in my hands, feeling their rough tickle on my good palm. My plan was to toss the insects at the infant cats and run. Which is what I did, or nearly.

As I approach the wailing cutlets, Mona appeared near the box and hissed. But this was no ordinary hiss: it was deeper, like an elongated moan. When I took a further step forward the moaning turned more menacing, like a call. It was. Suddenly, near Mona two male cats appeared and began to drone in the same way. I dropped the grasshoppers, which scattered. The cats froze, all of them, now arching their backs and hissing harder. They then began moving toward me.

Frightened, I turned back. Two more adult cats were on the staircase, hissing backup. The noise grew into a kind of collective keening. A din. I was alone with five angry adult cats staring me down.

I of course burst into tears, which is when my mother appeared on the landing. She seemed immediately to understand the primordial scene. Her accent all but vanished. “Leave her alone,” she said. “And leave the babies alone.”

It wasn’t a mother’s voice to a child but a mother’s reassurance to another mother. Upstairs, she slapped me. “Never,” she said, “never do that again.”

I ran off to my room, weeping and bewildered, sorry for myself and above all for being found out. But I never again saw motherhood in quite the same way. I also learned modern history, and stopped tormenting the cats.