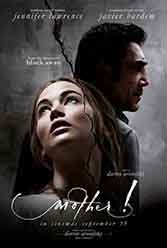 The frustrated, blocked writer has been at the center of some excellent films, including “Sunset Boulevard” (1950, featuring a naive William Holden) and “The Shining” (1980, with an insane Jack Nicholson). The writer in “Mother!”, a needy, self-consumed, nameless Javier Bardem, yearns to recapture the Famous Poet status he once had.

Seeking stimulation, intense experience, and ultimately adulation of the highest order, he invites a series of strangers into his isolated (it lacks even a driveway) Victorian mansion, much to the chagrin of his much younger, devoted, overwhelmed, socially isolated, and soon-to-be pregnant wife (Mother, played by Jennifer Lawrence).

Things get out of hand, first in small ways —guests/invaders, among them a wonderfully irritating Michelle Pfeiffer, violate the couple’s space and privacy and call their relationship into question — then on an epic scale that some viewers will find excessive, others gross and offensive.