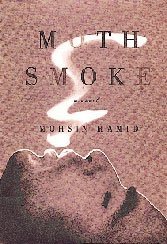 Hamid’s debut novel is a scathing satire about stalled-out twenty-somethings in Pakistan of the late 1990s, when both India and Pakistan became “atomized, atomic lands.” With Manhattan verve, Hamid covers lust, corruption, adultery and dead-end materialism.

Laid-off Daru turns to drugs to control his rage against Pakistan’s class system. The trouble begins when jet-setter Ozi returns from a long U.S. stint, emancipated wife Mumtaz in tow. Bored with her “increasingly emasculated, amoral husband” and unhappy with recent motherhood, she veers toward damaged Daru, becoming a moth for two men.

Enter soul music-loving Murad, a stuttering drug dealer and rickshaw “entrepreneur” who enlists Daru to rob high-end boutiques. He gets some of the narrative’s best lines. “In the past, when people said America has never given us anything, I used to agree. Now I say, ‘Yes, but America has given us Aretha Franklin, the Queen of Soul.'”

Hamid’s pre-“Reluctant Fundamentalist” effort is a funny and pitiless satire intended to prove urban dysfunction isn’t limited to Manhattan or London. Daru calls himself “a sob on fire.” Well done. So is the book.