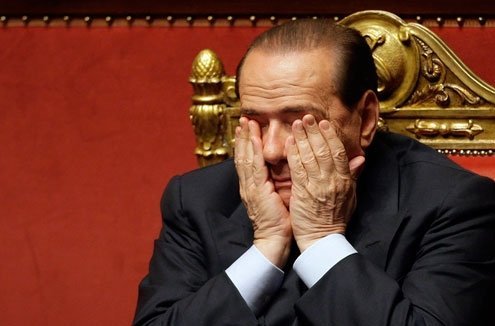 oney matters in Italy. People who have either much or little guard it jealousy. Media-driven economic hysteria doesn’t deter the need for milk or Nutella.

In the passing fad category is the obsessive dissecting of Silvio Berlusconi’s final days. With or without him, Italians will tolerate only cosmetic touch-ups to the layered circumlocutions that allow them to make and put aside daily bread and keep country homes. Berlusconi’s role as a Caesar-Nero re-enactor may suits his own sense of drama, and that of domestic and foreign media, which for three decades has been reporting an end to la dolce vita while ignoring Fellini’s irony, but hubbub is cheap. So is rhetoric.

More precious is Italy’s system of benefits and facilitations secured in 1970s and 80s after decades of Industrial Revolution inequities. Large and small agevolazioni, facilitations and shortcuts, and an aversion toward the letter of the law, still keep the country’s underground acres together.

Dwelling on Berlusconi’s humbling is means to avoid dealing with the next chapters, which so far lack both characters and plot. The euphoria of Berlusconi-chasing aside, his eventual replacement by a centrist government (once helpful to the very facilitations that austerity measures endanger) would hardly produce a honeymoon. Whether managed by a banker, so-called technocrats, or even by a Berlusconi-anointed backup, such leadership would struggle mightily to enact unpopular programs that diminish entitlements (particularly when it comes to the country’s retirement age).

While so-called technocratic governments are conjured as a stabilizing fix, they are only as strong as the parties that back them, and while it’s feasible to imagine a temporary Italian government led by an economist, it’s fanciful to think it would last. It would instead hold the fort until national elections cleared up the mess, if in fact they do.

Despite Berlusconi’s swan dive, a quick vote, or even one scheduled for winter, would most likely produce a party framework not unlike the existing one. There’s no wild card. The left might place ahead of the right, or vice versa, but the result would again generate edgy coalitions. Berlusconi is Italy’s last strongman.

Elections are among the oldest Italian lollipop. When in doubt, vote. Historically, the lollipop loses its flavor quickly. Coalitions fractured constantly until Berlusconi managed to serve out a full term between 2001 and 2006. The center-left, which defeated Berlusconi in 2006 running on an “anyone but him!” platform, collapsed within 18 months.

Italy’s immediate financial woes are more governmental (bonds) than individual (savings), and Berlusconi’s ouster seen as the first step in a kind of international reassurance and national cleansing and housecleaning. In truth, only fraction of the country’s working class has any faith in such hygiene. Most work both legally and on the side to ensure that their children, many of who can’t find jobs, are snug under a parental umbrella. “Family” economies are highly sensitive to change, fearing the worst, and not easily repaired let alone overhauled.

The resistance to pension reform and firing championed by the Northern League’s Umberto Bossi will find a counterpart champion in any alternative government. A country of entitlements, in which right and wrong are circumstantial and punishment relative, requires a “people man,” a role Berlusconi played for decades. Absent such a figure on the right, one will emerge from the left, social welfare’s safest harbor. The political clout that goes with resisting austerity is as powerful as rightist populism.

Though times may have changed, history has not. As recently as 1976, with labor unions in full bloom, Italy was labeled the “poor man” of Europe, its economy, currency and industrial production ridiculed in the European press. It responded with a boom-time 1980s that combined new Wall Street and old Detroit, putting gain ahead of scruples and eventually outstripping even the judgmental UK. Italians can hate themselves publicly but secretly appreciate their own resilience. They are Europe’s proverbial Chinese, sitting on a bridge awaiting the corpse of their adversary.

The giddy excitement generated by the Berlusconi morality play is misleading and risky. Get rid of Berlusconi, wrote one pundit, and the “substance will follow.” Really?

Italian disregard for politics and politicians (and the failure of the political class to conceive of the meaning of a constituency) exclude effective legislative change. Until Italy’s political classes leave room for younger, more inspired, independent-thinking leaders, or push through direct-election reform that responds to the popular will, few will perceive governmental decision-making anything but a rubber stamp for the interests of whoever’s in charge. Italians will argue and vote but ultimately continue a cultural tradition of back-door management that hews to conspiracy theories that believes only in what it knows, namely vested (read family) interests. Knowing this, parties play along: None are inclined to facilitate changes that would put them out of business.

Analysts and front-page intellectuals, many British and American-educated, are already taking turns announcing the need for Italy to evolve responsibly, and create a sense of civic self. But most of these analysts are indirect appendages of the vested wealth and power (and corruption) they’re so eager to slay. Double and triple standards and endless conflict of interest dirties the cuticles of Italian good intentions. Raging against the machine doesn’t mean turning down perks. Being able to do both remains the height of cleverness.

Though Italy’s unhappy sharing of economic woes with the likes of Greece is embarrassing, it falls short of national tragedy. Europe’s big boys miscalculated with Europe, and Italy, caught in no man’s land, must find a face-saving out.

But whatever the ongoing spasms yield, Italy is not headed for transformation. “The end of the Berlusconi government doesn’t necessarily mean the advent of a more credible and reliable government,” wrote veteran columnist Sergio Romano. It’s a line worth remembering.

Without Berlusconi, Italians remain what they are with him: Brilliant, self-interested, sneaky, and incomparably agile between the lines, emissaries of the best and worst of a human opportunism that an exasperated citizenry knows to live with and can’t really hate, lest a brother require a favor.