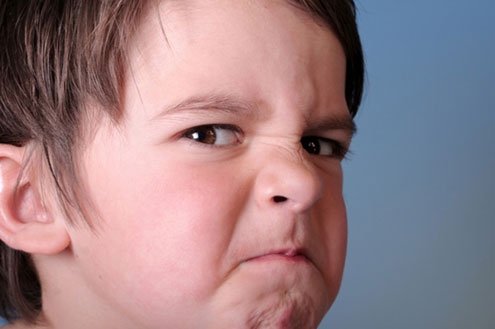 Why do you think you're making such an evil face?
I

am flexible. Seriously, I can still do the splits after 40 some years. But I’m not here to brag about my limber limbs. Instead, I’m here to rat myself out.

Among the most challenging facets of mothering (and there are many) is what I call the “sponge factor.” And I’m not talking about the sponge that wears square pants on Nickelodeon. What I am talking about is the very real fact that most children absorb their mother’s (or primary caretaker’s) emotions and moods with greater efficiency than any two-ply paper towel I’ve ever used. They lap up our behavior like sponges.

This, to me, makes for an awesome responsibility.

And by awesome I don’t mean super cool. I mean astounding, enormous, overwhelming.

A couple of years ago, I figured out that I couldn’t have any kind of personal breakdown without my children immediately hitchhiking a ride on my crazy emotional train.

This became clear during a déjà vu-laden epiphany with my then three-year-old son, who at the time was throwing a fit and screaming like a banshee about something banal. It was 6 p.m. and we were all tired. My temper was frayed. Without thinking, I fought his fire with my own:

“Nico! Why can’t you control yourself?”

And the flames raged on.

He was three. I was not.

At that instant I felt as though I was channeling my mother — she’d shot those same words at me when I was young. (Disclaimer: Parenting is a legal form of brainwashing.) I looked down at my son and saw myself at his age. We’re both intense. We both crave attention and need to express ourselves.

Suddenly, my thoughtless words boomeranged, and knocked some sense into me.

My mother’s generation simply didn’t have the tools we do today. It expected children to “Do as I say, not as I do…” — and stopped there. But that adage never helped me with my temper, and it certainly wasn’t going to help my Nicolò.

If I wanted my son to control his emotions, I’d need control mine fine.

Realizing this was easy. The follow through was another story. Until I attended a school-organized meeting that covered American writer Jane Nelsen’s book “Positive Discipline” (she’s a longtime family and child counselor). Her theories advise non-punitive methods as a means to teach vital social and life skills. Nelsen calls on parents to involve their children in the disciplining process. When bad behavior crops up, you start by asking questions, and listen to your child’s response, creating what the author sees as a crucial sense of interplay and belonging. I was skeptical at first.

Did it seem ridiculous to ask my five-year-old: “Do you think it’s a good idea to lick your brother’s hair?” Yes.

Did it seem absurd to inquire of my seven-year-old: “Do you think it’s a good idea to step on your brother’s face?” Yes.

It seemed just as insane to await their answers. But I did. And both of them responded very sanely. “No,” they both said.

So I pressed ahead with my wild new tactics. “What do you think we should do the next time you guys can’t control your behavior and listen to mom?”

I waited (as per the book’s suggestions).

“Maybe we should take deep breaths?” my five-year-old suggested.

“Good. And what do you think the consequence should be next time?” (At this point I felt like a character in a bad “Saturday Night Live” skit, but decided to trudge on because I really wanted to see where all this would lead.)

“Maybe we lose 30 minutes on the iPad?” Whoa. My seven-year-old had just come up with an answer (a punishment, really) that blew me away (instead of blowing me up)! I hereby retract the wild part of the wild new tactics.

The more I included my children in the disciplining process, the less I needed to discipline. In short, I’m happy to report that what seemed like both hippy and dippy actually works quite well.

At present, my two tiny sponges are soaking up better behavior from their mother. We’re still an excitable bunch and we’ll always be prone to the occasional emotional extravaganza. But our home turf is definitely more peaceful now. And if I want flexibility, I can still do splits.