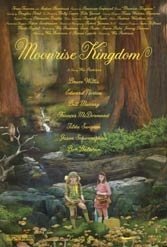 “Original” is an abuse victim. Few claims to originality stand up. That’s not the case with director Wes Anderson’s “Moonrise Kingdom,” among the best, and yes, most original, American fables produced in recent memory. Set in 1965 on a Boy Scout camp on a misty New England island it’s about two 12-year-old misfits, a runaway Scout and a runaway girl, who decide to behave like adults in a spellbound sliver of timeless Americana that Anderson gently carves out as their 90-minute habitat. A beach and a kiss is their kingdom.

The film, at once awkward and beautiful, seems like something the painters Edwin Hopper, he of bleak storefronts, and Norman Rockwell, a lover of soda pop set pieces, might have conceited together with the help of Mark Twain, whose kooky Tom Sawyer and hardscrabble Huck Finn helped define the coming of age genre.

The boy, Sam (Jared Gilman), is an ingenious corncob-pipe smoking orphan, and the girl Suzy (Kara Hayward), a smile-less bookworm considered a sore thumb by her lawyer parents (played to a T by Bill Murray and Frances McDormand). Weaving seamlessly between the bittersweet and the bizarre, Anderson charmingly tells you how Sam and Suzy met (she played a raven in a school performance of Benjamin Britten’s “Noye’s Fludde”) and elaborates on their wacky island-hopping elopement, which includes a sympathetic Scout Master (Edward Norton) and an equally understanding sheriff (Bruce Willis), both of whom are eager to keep the upstarts from wicked witch — social services — way.

But as good as these parallel grown-ups are, as both characters and actors, this is an adult fairy tale pieced together by two men, Anderson and co-writer Roman Coppola, that remembers and imagines blurry bits and pieces of what it was like to be a dreamy and ostracized boy. At one point Suzy’s father Murray calls the Scouts “beige lunatics,” which in fact they are, since this everything about the tale seems in the moon’s, and Britten’s, gentle keep.

Anderson last stunner was 2001’s “The Royal Tenenbaums,” which nipped at the heels of “Rushmore.” The greatness of both “Rushmore” and “Royal” depended almost entirely on Anderson’s capricious but heartfelt management of a family’s implausibility. He does much the same here, putting a boy and a girl in the service of the first flush of adolescent absolutism and making adults do its bidding. The result is among the better American enchantments ever put to film, at once gentle and cruel; boyish and adult; fantastical and hard-edged; like an infant “Wizard of Oz.”