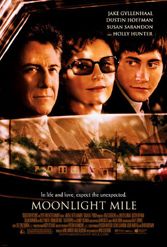 A well-written, well-acted American story that it dwells willingly on grief without showing off. Though the daughter of Ben and JoJo Floss (Dustin Hoffman and Susan Sarandon) has died in a shooting, self-effacing fiancée Joe Nast (Jake Gyllenhaal) stays on in their home, balancing respect with good manners. When Joe begins falling for local girl Bertie (Ellen Pompeo in her first role) the balance changes. Joe begins to assert himself and imagine a future outside memories of Diana Floss. Yet he must still do the Floss’ a fundamental favor: testify to the circumstances of Diana’s death.

Director Brad Silberling sets the movie in the 1973 and trusts his exceptional actors to navigate alien territory. Bertie and Joe affectingly imply far more than they say or do. Sarandon’s JoJo adopts wry wit to deflect the hurt. Hoffman’s Ben is a man who can’t admit the damage done. Never forced, the film reaches no transcendent conclusions, no Gnostic wisdom for all to know. Instead, it just mines the foibles of sorrow in unforeseen ways. Lovers of testosterone need not attend; this is much ado about what’s not said.