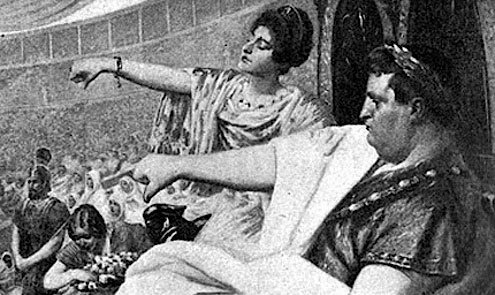 That Saddam Hussein would eventually be sentenced to death was expected.
B

y hailing the death sentence against Saddam Hussein, the United States has entered the realm of the surreal as it relates to an occupying power.

An altruistic occupier (as distinguished, say, from a Saracen) enters a besotted land with the intention of freeing residents from tyranny and installing the rule of law following years of coercion.

The altruistic occupier says it intends to revive governance and infrastructure and provide military oversight and economic incentives necessary to begin anew. It essentially seeks to install civility and civil license.

This comes at a meddlesome price because the occupier must first try to manage all basic administration and ensure its policies are rigorously followed.

Naturally, the captured tyrant has a role to play in the drama.

He must be tried, as publicly as possible, to demonstrate the legitimacy of the altruistic invasion and help give vengeful voice to those who suffered under his rule.

He must be humiliated and pilloried as a model of a bad past against which any good future should be vaccinated. His inevitable death sentence — passed by a tribunal or by peers — is part of a melodramatic closing chapter the occupying power seeks to sign off with. In this sense, the capricious cheers from Washington hailing the verdict are incumbent to the theater.

Procedurally, however, the legal extinction of a tyrant should parallel a kind of reconstructive timeline.

Not so in Iraq, where only Saddam’s fate has followed a desired plotline. Attempts to suddenly depict the sentence as purifying or defining are, like so much about Iraq, manipulatively dishonest.

In fact, the liberator is now merely the invader.

And the invader is largely loathed.

Here is what the invader has done.

— Promoted a pretext that the tyrant was a terrorist who aspired to build weapons capable of destroying the world.

— Absent the proof and despite European cautions, forcibly violated sovereignty.

— Dispensed without repent of any moral high ground when the invasion’s pretext of — that the tyrant possessed nefarious arsenals — was disproved.

— Destroyed most of the nation’s functioning institutions, infrastructure, and eliminated all layers of authority.

— Presumed victory, and announced such victory brazenly, using the capture of the tyrant as a justification.

— Fattened up on its own early accomplishment and ignored pent-up internal rage.

— Botched its role as pacifier by disbanding the national military and unwanted patriarchies, opening the way to an array of private revenge, sectarian violence, and terrorist opportunism.

— Accused external doubters of lapsed patriotism while failing to acknowledge that the tyrant was a tyrant (at least in part) to keep a deeply fractured and recalcitrant land under control.

— Given the captured tyrant the credibility to label the invaders as gross trespassers.

That Saddam Hussein would eventually be sentenced to death for crimes against humanity was, I repeat, expected.

What is unexpected is where the occupier stands at the moment of the sentence.

It barely controls a nation that it ruined to save, a paradox that makes better sense to politicians than soldiers or citizens.

It cannot rein in brutalities more comprehensive than the kind the tyrant orchestrated.

It bears the full brunt of a mayhem that the dictator predicted in the event of his ouster.

It cannot promote domestic consensus on what move to make next.

It has no regional allies willing to support or assist its policies; they fear political contamination.

It cannot (will not) modify a hard-line position that has identified intervention in Iraq with the larger war on terrorism, leaving Iraq broken and adrift, certainly far worse for wear than under the now-condemned tyrant.

The nobility of good intentions is transmitted effectively so long as you can persuade or even delude others that the enterprise is, or was, for the good.

To do that, you must suggest restoration is on the way; that you’re wanted; that civil society is near at hand; that the actual situation is considerably better than it seems, obscured only by partisan hawkers.

But this is no partial obscuring.

Nothing is near at hand.

Eclipse is the color of the shadow.

And killing Saddam Hussein shoos no fog from the moon.