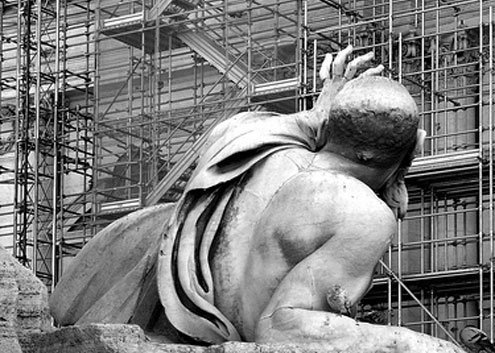 Construction at Rome's Piazza Navona in 2006 seemed to upset even Bernini's figures.
T

hough they stretched well into September, Rome’s August holidays seem finally and definitively over. That means several things. Tans are fading. Temperatures are dropping. And city traffic has resumed its helter-skelter pace.

But for me, the real sign that summer’s over isn’t the honking of cars, or the squeal of the motorini. It’s the hammering.

Like many people who read news reports, you might think that Italy is paralyzed. On paper it is. Except for the home repair and renovation industry.

Some visitors mistake Rome for a city that doesn’t take care of itself. Many travelers ask me about the copious amount of graffiti splashed on the walls and trains. Others worry, rightly so, about the state of Rome’s irreplaceable ruins and monuments. Although a major renovation is now in the works, even the Coliseum, Rome’s symbol and biggest money-maker, was allowed to blacken and decay like a long-neglected molar; its last full overhaul came 73 years ago.

But while the Coliseum, or the Trevi Fountain, and the Aurelian Walls, are all but ignored, Rome’s apartment buildings are in a neurotically-constant state of upkeep.

Including my own. Three months after I first moved in, my next-door neighbors decided on a complete renovation. Including the terrace that sat directly in front of both the apartment’s master bedroom and living room, my home office. The summer of the renovation I was up to my ears in articles and interviews. Phone interviews. Every time a source trailed off, unable to hear my question because of the constant banging and hammering, I wondered if I had seriously underestimated the benefits of the 9-to-5-office environment.

Making matters worse, summer was just heating up. Like many here, I don’t have air-conditioning; I open my windows instead. That year, I had two choices. I could open the windows and allow in not only the maximum amount of noise, but also a frankly impressive amount of dust and grit that, by day’s end, coated my living-room floor, furniture, and computer. Or I could close the windows and bake in the heat, accompanied by less dust and only slightly less noise.

I usually left the windows open. This had the added benefit of forcing the construction workers to see, and occasionally interact with, the person they were torturing.

When August rolled around, the workers disappeared. I was thrilled. I thought the days of trying to work through the cacophony were over. It was my first Rome ferragosto. I didn’t know any better.

But autumn came, and with it more construction, this time on the floor above me. And it started, every day, at 7:30 a.m.

By now I’m almost used to it. Despite my initial grudge, I even befriended my repair-bent neighbors. Laura, an occupant, recently sent me an email: “Volevo avvertirti che lunedì prossimo devono montare delle impalcature sul nostro terrazzo, proprio di fronte alle tue finestre.” They’d be installing scaffolding on their terrace… right in front of my window.

Returning from their August holidays they’d noticed some broken off cornice pieces, which Laura explained was “molto pericolosa!”

Like clockwork, the noise began at 7:30 a.m. on a Monday. Of course, the workers finished their day’s work at 11 a.m. and disappeared.

The noise alone was frustrating enough, but the exasperating part was being on their early shift. According to Italian labor law, construction work can’t start before 8 a.m. — just one more law that’s flaunted. That’s no surprise. What does surprise me is that nobody seems to complain. And that I’m never on anyone’s afternoon construction shift. Where’s that lucky building? Because I want to move there.

A couple of weeks ago, I inadvertently told guests they could stay at my apartment when, as it turned out, I was also in Rome. I planned on booking a hotel room for the night. Instead, a friend of mine away on a work trip offered me her room in what seemed to me a lovely and seemingly peaceful building. I looked forward to a good night of sleep.

I hadn’t noticed the scaffolding.

The next morning, I woke to mental images of “Breakfast at Tiffany’s.” And I realized why: “Moon River,” the volume cranked up as high as it would go, was being played like a rap song at a club.

With a groan of realization, I peeked into the 18th century courtyard. There they were: Construction workers, laughing, shouting, and setting up for the day. I’d never seen such pep and verve.

And no wonder. In this city of constant upkeep, they’re the only ones not worried about finding work.