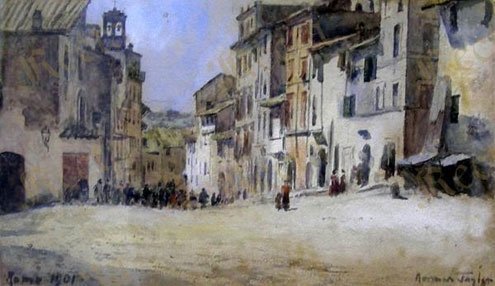 In ancient times, Monti was seen as a den of iniquities.
T

ell people you’ve moved to Monti and a kind of light can suddenly shine in their eyes, as if you’ve done them a favor. Many will quickly tell you that Monti is their favorite Rome neighborhood.

It is certainly among the trendiest. People who don’t live here tend to migrate Monti’s way late in the evening and populate the piazzetta (the common name for Piazza Madonna dei Monti), drinking beer and wine on the steps around the fountain. They flock to the many local bars, restaurants and shops. Often enough, the men have beards and the women wear lipstick in bright pinks and reds.

This is all new to me, at least the trendy part. I always fled trends, seeking the opposite of what everyone flocked toward. But the Monti move happened by chance, a lucky combination of apartment, location and price.

But now that I’m here, I’m being won over by the neighborhood’s character, its people, its car-less (and quiet) streets and yes, its trendy bars and shops.

In Ancient Rome, Monti was known as Suburra, home to the city’s lowlife. Gangs, prostitutes, and swindlers hung out here. A huge wall was built to block the sight of the slums from the Forum — a kind of wholesale censorship that still occurs 2,000 years later (the most recent example was the razing of shantytown favellas ahead of the World Cup in Brazil). A large chunk of the wall is still visible behind the Forum of Augustus. In medieval times, the district was densely populated and earned the name Monti for its location at the convergence of three Rome hills, the Esquiline, Quirinal and Viminal. When Benito Mussolini came into power in the 1920s, he leveled whole sections of the area, trying to rid the city of its decrepit side as part of his new imperial enterprise. The demolition uncovered ancient Roman ruins but also made room for horrendous Via Fori Imperiali that runs from Piazza Venezia to the Coliseum. It also left hundreds of locals without homes they’d lived in for generations (they were relocated to apartments far from the city center).

Monti has been rejuvenated in recent years. When I lived here for a month seven years ago, I saw only typical Italian shops, coffee bars and restaurants. Via Urbana hosted the woodworker, the leather worker, a coffee bar, and some trattoria-style restaurants. Now, these traditional shops, while they still exist, stand out in the presence of boutiques and vintage-inspired restaurants.

Gentrification is always double edged. While I mourn that I can’t go to a “normal” Italian coffee bar, I can’t help but be pleased that my bread choices are now considerably wider than the just the casareccio, sciapo or gran duro offered at most every alimentari, or grocery store. New shops pop up on Via Boschetto monthly, most selling handmade shirts and skirts and jewelry. At the same time, the covered market on Via Bacchina stands nearly empty, only two of its many stalls occupied (by a butcher and an alimentari). People seem to blame city’s bureaucracy, but the real reason may be higher real estate prices and a new wave of prospective buyers. Monti is now among the most sought-after areas in the city.

It’s an old story. Rising rent expels traditional parts of the community and replaces them with a new crop of people with deeper pocket books (the rise of Brooklyn, New York is a good example.) Sometimes I wonder if I’m contributing to the displacement. Should I feel bad about it or just get on with buying my seeded bread?

The answer, I suspect, is somewhere in the middle. In that spirit, here’s a short list of food shops and restaurants from both sides Monti’s spectrum.

— Mia Market (New). This small shop gets local produce delivered on Thursday and might just be the freshest place to buy tomatoes. It also stocks a wide variety of breads and cheeses produced by area farmers. Tables and chairs invite shoppers to sit down for a lunch of quiche, soups and sandwiches.

— Market on Via Napoli (Old). If you’re looking for more variety in your vegetables, try this market. Though most of the produce is offered wholesale, the seasonal offerings are excellent. Between the clothing stands is butcher and an alimentari.

— Urbana 47 (New). The restaurant (it bills itself as a “food project”) looks super-vintage modern from the outside but the food delivers. They serve good burgers and also offer a seasonal menu. Since it openly advertises “culinary curiosities,” expect a little something more than your regular carbonara and amtriciana (as in tapas and bagels). Via Urbana 47. Tel. +39.06.4788.4006. Open daily.

— Taverna Fori Imperiali (Old). This is a delicious family trattoria that’s a step above the rest. There is a seasonal menu section that changes regularly, but delicious pastas and meat are always on tap. Book ahead. Via Madonna dei Monti, 9. Tel. +39.06.679.8643. No website. Open daily.