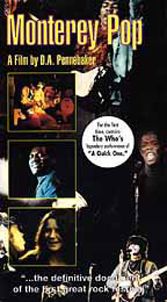 D.A. Pennebaker’s vivid documentary chronicle of the 1968 Monterey International Pop Festival is a musical poster child for the Summer of Love (Pennebaker had also made Dylan’s British road movie “Dont Look Back” the year before). In Monterey, police mingle with kids and kids smile back. But the music is anything but tranquil. The Who and Jimi Hendrix, then little known in the United States, make their raucous beachhead. Ravi Shankar (Norah Jones’ father, if you must know) occupies the film’s adoring (and devotedly lengthy) conclusion.

In the middle of this musical hit parade (Simon & Garfunkel, the Mamas and the Papas, Canned Heat, Jefferson Airplane, and the crazily charismatic Otis Redding), Pennebaker hits gold — Janis Joplin in a feral, 11-minute rendition of “Ball and Chain.” Watching “Mama” Cass Elliott and Hendrix as Joplin sings, with Cass seeming to behold God, is worth the movie. Eric Burdon of The Animals was so taken in by the mood that he wrote the hit “Monterey” to commemorate the festival. Within two years, Redding (plane crash), Hendrix, Joplin, and Jim Morrison (overdoses) were all dead. Mama Cass followed in 1974. None had turned 35.