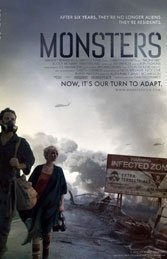 Six years into some immediate future, huge octopus-like creatures have fallen from space and nested between Texas and Mexico in what the military labels the “infected zone.” In it, Bratty newspaper photographer Kaulder (Scoot McNairy) is waylaid by his rich publisher who demands he get daughter Samantha (Whitney Able) out of hazardous Mexico.

British writer, director and cinematographer Gareth Edwards’ sci-fi flick opens promisingly enough, with chaotic scenes in Mexico as U.S. warplanes bomb infected sites. Unable to get out by sea, the intrepid duo plunges inland into the creature-infested heart of darkness. They’re headed for “The Wall,” a kind of Great Wall of America shields the U.S. from the alien menace.

Two things soon come clear. This is less about monsters than bringing home war and occupation, a clumsy attempt to take Iraq-style horrors and give them pop relevance by making an alien menace into a status quo; second, you can’t make a good B-movie if the romantically-inclined leads are stuck with sub-basement, ad-lib dialogue. When howling emerges from the monstered hinterlands, Kaulder and Sam repeatedly ask, “What is that?” It gets worse. Kaulder: “It’s going to get dark soon, we need to keep on going.” Sam: “Well, I have to pee.” Sure enough, she does.

Edwards’ “make love, not war” subtext is noble enough. He casts doubt on air strikes and their civilian causalities. He produces striking visuals of destruction and desolation. His “wall” is a clear dig at exaggerated homeland security, with the menace actually posed by the aliens (if not provoked) remaining ambiguous.