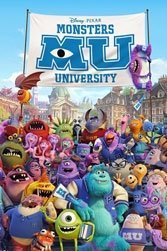 Let’s face it; kids aren’t the most discerning viewers. They’ll watch anything. Disney Pixar films are universally magical because they redefine animation with beauty and finesse. “Monsters Inc.” (2001) was a chapter in Pixar’s great opus but “Monsters University” is, sadly, a mere footnote.

This rip-roaring prequel looks at how Mike (Billy Crystal) and Sulley (John Goodman) first met. Mike, our podgy green ball of little man syndrome, is determined to become a professional “scarer” after falling in love with the art in primary school. Jump forward 10 or so years and his brain-over-brawn attitude lands him a place at the prestigious Monsters University. When he links up with burly star student, Sulley, the unlikely pair is forced to convince demonic Dean Hardscrabble (Helen Mirren) that they’re up to the mark.

The imaginative scramble of goofball characters shows the vintage Pixar touch. Squishy (Peter Sohn) pants a gooey path into our hearts, Art (Charlie Day) serenades the screen with his magnetic madness and Johnny Worthington (Nathan Fillion) plays the elitist twerp we love to hate. This wacky microcosm tackles every caricature we’d associate with campus life. The characters are relatable and, crucially, very funny.

However, that’s where the magic ends. It’s great we have a loosy-goosy flow of funny figures but the plot’s just floppy. It follows the run-down formula of overcoming the odds, self-belief and moving beyond mere image. Sure, there’s the good morals side, but it reaches a point where the message takes over the movie. The raucous offering breaches the kid in us yet it’s far too humdrum and predictable to reach any further. It’s a shame for Pixar to offer something so gummy when you consider their weighty record.

Perhaps it’s too harsh to call this lazy, but there’s certainly something lost in this picture. Maybe it’s the wide-reach, maybe it’s the buzz of something new or maybe it’s Pixar losing the test of time.

Nevertheless, tail-wagging children will lap this up. As for adults, this’ll be chewing gum for the mind.