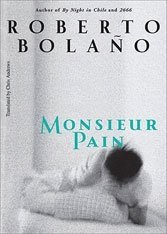 Skeptics of Bolaño’s blood ties with human alchemy need only read these few pages to think again. Among the Chilean’s most distinctly surreal works, “Pain” effortlessly stitches Poe, Magritte and prewar Paris (April 1938) into rippling parable about what’s real and what’s not, neither outcome particularly hopeful.

“Pain” is Pierre Pain, a gas-scarred World War I veteran who divides his poorhouse time between poetry, reverie, the “occult sciences,” and unrequited affection for Madame Reynaud, who enlists his help to help save a friend-of-a-friend Peruvian poet named Vallejo who is dying in a Paris clinic of hiccups (César Vallejo, an acknowledged avant-garde master). As soon as Pain involves himself in the Vallejo case, magic rears up. Shadowy figures appear, dreams come and go, and, most important, patient Vallejo becomes inaccessible. Pain’s dubiously substantive life is fully transformed into “dreams and delirium,” the paranoid ethereal.

A follower of Franz Mesmer, founder of mesmerism, or animal magnetism, Pain is prey to the “nervous music” around him. Vallejo’s hiccups up close sound to him like a “sonic ectoplasm or a Surrealist found object.” Pain, like Europe, is about to find the abyss. He meets a one-time fellow student of the occult, Plemeur-Bodou, who has moved to Spain and sided with Franco’s Republicans, using mesmerism to interrogate of prisoners and spies. The enraged Pain can muster little more than despondence. Solitude, he says, “is perhaps the subtlest or at least the most lucid of the forms that madness can take.” Pain’s enemies are “in the air,” and by whimsically mixing fact and fiction Bolaño gives his demi-ghosts sway over Pain’s life, making late-1930s Paris seem medieval.