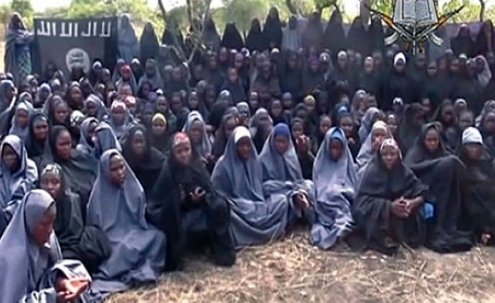 Boko Haram has release various shots of the women abducted in Chibok, Nigeria in April 2014.
T

wo years have gone by since the hashtag #BringBackOurGirls took social media by storm. On the night of April 14-15, 2014, the terrorist group Boko Haram abducted 276 schoolgirls from a state secondary school in Chibok, Nigeria. The incident provoked a massive international response that included outrage from top-level figures including U.S. First Lady Michelle Obama and Nobel Peace Prize Malala Yousafzai. Though 57 of the girls managed to escape in subsequent months, 219 remain in captivity. In early April, negotiators received a video showing 15 of the girls, apparently in good health. It provoked a mixture of relief and helplessness.

But hope for the safe return of the young women must include an understanding of the consequences.

Boko Haram, which seeks the creation of an Islamic state in West Africa, has long used kidnapping as extortion tool — though a kidnapping on such a large scale was admittedly unusual. The girls and women it abducts are often sexually abused. Some are used as suicide bombers.

Those who do survive are invariably emerge tainted by the ordeal. A recent report by International Alert and UNICEF called attention to the discrimination and rejection faced by victims trying fit back into their communities after their release. “Entrenched deterministic views” among local communities, the report said, meant that children born from rape would be perceived as “bad blood,” soiled by their biological fathers. “A child of a snake is a snake,” goes a regional saying. If a victim had a partner before her abduction, that partner might reject her, too.

Pregnant captives, once freed, also faced being stigmatized as the mothers of future terrorists as well as being feared in their own right as potential suicide bombers. Boko Haram has been pitiless in transforming young women into human bombs.

These perceptions can lead to heartbreaking community disruption. From my Caribbean vantage point, the report brought back sour visions of the 14-year reign of terror imposed by former Haitian dictator François Duvalier. After fending off a 1958 army coup, Duvalier created a paramilitary organization soon to be known as the Tontons Macoute. These legalized thugs terrified Haitians for decades.

The name Tontons Macoute (literally “Uncle Gunnysack”) referred to a figure in Haitian folklore, a bogeyman who kidnapped disobedient children, put them in his gunnysack, and ate them for breakfast. Duvalier was believed to have contributed to the spread of the fear-mongering name – which makes sense considering his “Papa Doc” nickname. The role of the paramilitary was to punish “disobedient children,” in this case his opponents.

Armed with machetes and guns, Tontons Macoute raped and murdered in broad daylight. They sought not only to spread terror but also to provoke community disruption. They raped women in the presence of close relatives. They forced people to have sex with close relatives under threat of death. They lynched Duvalier opponents and left their corpses to rot. If a member of a deceased’s family tried to recover the body for a proper burial, they too would be killed.

By bringing the horrors of rape, incest, murder, and lack of proper burial into daily life, Duvalier’s regime followed through with its agenda of creating collective stress and social dysfunction. Political unity was impossible under such circumstances. The atrocities undid whole families and communities because many victims found it unbearable to be close to relatives and friends who had been so horrifically “tainted.” Rough estimates are that the Tonton Macoutes murdered more than 30,000 Haitians in their quarter century-long reign of terror.

Though the Nigerian mass abduction exists in a different context, it’s crucial to stress the effects of community disruption as part of terrorist strategy. Though using hostages as suicidal bombers has the immediate effect of killing innocent people, its secondary effect – the generating of collective anxiety — unfolds and develops over time, particularly when former hostages return home. Phobias are disseminated and social dysfunction follows.

If the girls are released — and hope remains that they will be — it’s imperative that the Nigerian government and humanitarian organizations be ready to provide both the hostages and their communities with the support they need. They all are victims.