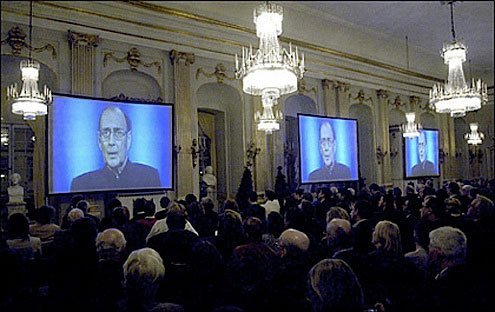 Pinter on Iraq: “How many people do you have to kill before you qualify to be described as a mass murderer?”
E

loquence is a brute these days, stubbornness its grand prize. There’s Harold Pinter, cancer raging in his throat, hoarsely lambasting the United States in a vitriol-laden Nobel acceptance speech. “Brutal, indifferent, scornful, and ruthless,” he says of U.S. policy. “What has happened to our moral sensibility? Did we have any? What do these words mean?”

He asserts that the invasion of Iraq was “blatant state terrorism” offensive to the dignity of man.

There’s wheelchair-bound Pulitzer winner columnist Charles Krauthammer seeming to embody the raging, fist-banging spirit Pinter abhors. Saddam Hussein, he writes, “deserves to be shot like a dog — or, same thing, like the Ceausescus.”

Saddam, he continues, “should be placed in a glass booth, like Eichmann, like some isolated specimen of deranged humanity, symbolically and physically cut off from the world of normal human values.”

But who, Pinter demands uncomfortably, lays credible claim on such values?

Not the United States, he says.

“The United States supported and in many cases engendered every right wing military dictatorship after the end of the Second World War. … Hundreds of thousands of deaths took place … and they are attributable to American foreign policy.”

America manipulated power worldwide “while masquerading as a force for universal good.”

Pinter’s rhetoric at times abuts Osama bin Laden’s, who is loquacious in Arabic, not English, removing himself from ethnocentric the Western news mix. He is heard but rarely cited at length.

He insists America views the world disrespectfully and hypocritically, failing to understand the consequences of policy. “All manners, principles and values have two scales: One for you and one for everybody else.”

Islamic terrorism is “defensive,” territorial as well as religious, and exists not to destroy the American ethos but to balance American “injustice toward the Islamic world, especially in Palestine and in Iraq, and their occupation of Saudi Arabia.”

“How long will fear, killing, destruction, displacement, orphaning, and widowing be our sole destiny, while security, stability, and happiness is yours?”

The question matters because no war is being fought on American soil. September 11 was an act of terrorism, not war. New York was only briefly in flames. The terrorist eradication process, ancillary victims aplenty, has been carried elsewhere.

Krauthammer’s conclusion on Saddam repudiates consequences: “We cannot leave until Saddam Hussein is dead, executed for his crimes. No one will say it, but everyone knows it.” Everyone?

Pinter on Iraq is loftily impatient: “How many people do you have to kill before you qualify to be described as a mass murderer?”

Bin Laden to Iraqi Muslims is typically blunt: “Stand up and prepare for the real life of killing, fighting, striking, and injuring.”

Early in his speech, Pinter says character development is intuitive, magical, an act of verbal transubstantiation: “Our beginnings never know our ends.”

Thus, some see Pinter as a decent but naïve British intellectual, others dismiss Krauthammer as petulant pro-Jewish conservative, and most label Bin Laden a monstrous pseudo-Muslim bereft of humanity and conscience.

Partial truths, all of them.

The problem with bias is how it contaminates second thoughts and rejects revelation.

You expect what to hear.

You learn what to dismiss.

You seek an easy summarizing voice, and one is inevitably made available.

Pinter is right, we feed on lies and revel in compounding historical errors.

Krauthammer is honest, Saddam’s own society would shoot him like a dog.

Bin Laden is correct, there are two scales, maybe more, none entirely fair (“It is better to be at the bottom of right,” he writes, “than at the peak of wrong,” a fascinating assertion.)

What matters ultimately, however, is not the relative rightness of these positions or the zeal of their champions, but how context is applied to their words and thinking.

Thirty-five years ago, in June 1978, the Russian novelist and Nobel winner Alexander Solzhenitsyn — long a prisoner in Soviet gulags — addressed Harvard graduates in a speech many considered deeply reactionary at the time. The West, he said, had lost its civil courage. Over the years its nations had seized colonies “despising any possible values in the conquered peoples’ approach to life.”

He warned of “incomprehension” that would arise from measuring vast regions “with a Western yardstick.”

“It is difficult,” he observed presciently, “to estimate the total size of the bill which former colonial countries will present to the West, and it is difficult to predict whether the surrender not only of its last colonies, but of everything it owns will be sufficient for the West to foot the bill.”

There is no need to predict any longer: The bill is in and the West cannot foot it.

What is sadder still, and makes Pinter’s ruddy-voiced j’accuse poignant, is that we’re busy drafting a new and costlier tab.