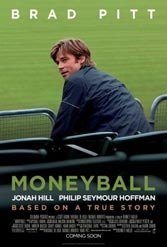 Director Bennett Miller’s film is in the great tradition of American sports movies, rousing, lucid, and sentimental at the right moments. Thanks to the brilliant but understated tandem of Brad Pitt and Joshua King, it takes a baseball story that many nonbelievers might find distancing and presents it as gentle but gripping morality play about the hardships and satisfactions that can come from taking chances.

Pitt plays Billy Beane, the real-life general manager of the perennially penurious Oakland Athletics, a baseball team that won’t cough up the cash to hold on to its star players. The year is 2001. By chance, Beane, a high school graduate who turned down a Stanford scholarship for a baseball career (which faltered), stumbles on awkward, overweight Peter Brand (Jonah Hill), a young Yale economics major employed by the rival Detroit Tigers to statistically analyze the strength of players, an unprecedented undertaking since the baseball beast has long nourished an old-boy network heavy on scouts.

Bean hires Brand away from Detroit and the two try to rebuild the cheap A’s based on statistical probabilities, picking bargain players on the game’s fringes to create what Brand calls an “island of misfit toys.” They’re loathed by insiders and resisted by manager Art Howe (Philip Seymour Hoffman), who often refuses to do as Beane tells him (“You’re killing this team.”) Miller’s film, from Micheal Lewis’s 2003 bestseller, portrays Beane as near-middle aged man in the joint thrall of sadness and resolve. He can’t even bear to watch his team’s games. More importantly, it gives texture to resistance to change both shape and texture.

The long-underrated Pitt gives a career performance, believably nuanced from the start. He’s buttressed by the equally deft King, who gradually evolves from apprentice to friend. Even Beane’s unsettled family life and his love for his daughter, often hokey sand traps, only strengthen the understated story, for which co-screenwriters Aaron Sorkin and Steve Zallian deserve immense credit.

Miller, who directed Hoffman in “Capote,” milks Pitt’s melancholy zeal. The result is a remarkably able, decent and forthright 21st-century Hollywood production destined to find a deserved place among the best American sports films ever made