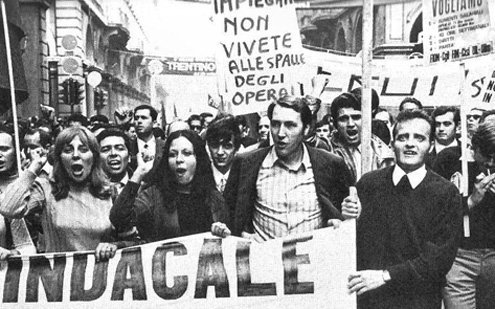 In the late 1960s and throughout the 1970s, Padua was a hotbed of leftist activism — and drug abuse.
L

ast week I took a road trip with a friend. The original idea was a boat trip along the Mincio River, from Mantua to the Po via the lock conceived by Leonardo da Vinci. I added a day in Treviso to visit old friends and buy a table, then adding a second day in Padua — again to visit a friend — and purchase a sofa. All went as planned: I visited the friends, ordered the table and the sofa. But the trip brought insights.

The Italian expression tutto il mondo è paese (all the world’s a neighborhood) extends to rivers. Gazing at the Mincio under the golden haze of early fall, water whispering through the weeds along river’s edge and eddies of debris in the lock’s pool, I was transported backwards. I could have been on a family boat trip on the Mississippi over Labor Day or the Rock River, in my old Midwestern front yard.

Like many midsize Italian cities, Mantua’s once-starring role in Western History 101 has shrunk to a bit part on the provincial stage. On this Sunday afternoon rural visitors in their going-to-town best fought for parking and strolled where Renaissance painter Andrea Mantegna once found inspiration for his revolutionary frescoes in Mantua’s castle. International visitors to a classic car rally competed for café tables with bus tours from Lecce, while African traders hawked cigarette lighters and statues under the arched porticoes.

If Mantua was once the frontier of Venice’s inland empire, Treviso was that empire’s agricultural heart. Venice, built on commercial risk and sharp trading, now seems limited to over-priced pizza and tired orchestras in St. Mark’s square. But Treviso kept the commercial tradition alive with fast fashion (Benetton), comfortable shoes (Geox) and the world leader in rat poison (Massimo Donadon).

Contented ducks glide along the miniature canals that wind around Treviso’s elegant fish-market. Trevigiani chat over aperitivi and tramezzini, the cocktail sandwiches that are a Veneto specialty. Snow sparkles on the Dolomites in the distance. Hearing the thick Treviso accents of young people with obvious African or Asian roots makes it impossible to forget Treviso’s debt to the immigrants who prop it all up.

After Treviso, it was off to Padua, which I had visited monthly during my 15 years of marriage.

All urban outskirts are ugly, but the beauty they embrace makes Italian ones doubly so. Heading into Padua’s center, I felt a surge of emotion. My unconscious was quicker than my intellect to recognize the route to my former mother-in-law’s house. Nothing can cut as deeply into hidden emotions as banal gestures.

Though I worried Padua would revive suppressed anxiety and pain, it turned out differently.

When I first visited in the late 1980s, Padua was where the open wounds of Italy’s decade of violent terrorism, the anni di piombo, or “years of lead,” suppurated most openly. In the 1970s its venerable university had been the pulpit of Marxist professor Toni Negri, who inspired several radical groups that were the progenitors of the Red Brigades terrorist cells. When the armed revolution intended to transform Italy into a workers’ paradise failed, the would-be revolutionaries retreated to the private paradise of drugs.

Heroin cut a swathe through my former husband’s social circle. Dozens of friends and acquaintances, children of professionals, academics or entrepreneurs, stole family silver, ruined brilliant academic careers or died, some by their own hand, some in car accidents. In the 1980s, drugs made central areas such as Prato della Valle, the 18th-century piazza (Italy’s largest) into no-go zones.

But my road trip offered a different Padua. I had coffee in a bar that had once been dealer central. Busloads of pilgrims to the nearby church of St. Anthony took selfies from benches once colonized by dozing tossici (short version of Italian for drug addict: tossicodipendente).

If my previous trips to Padua were regimented by my ex-husband’s hometown errands, this time I could wander as I pleased. I finally visited the park surrounding the Scrovegni Chapel and Giotto frescoes. I saw the Eremitani Museum and visitor’s center. I strayed into the elegant Renaissance Piazza dei Signori, where petulant hard-core leftists once gathered, sometimes lashing out at nonbelievers. My former husband avoided it.

Once it was the “good” piazzas that had scared me. In Piazza delle Erbe or della Frutta, where members of his social circle once met, I had feared being seen as an interloper or suffocating in the bell jar of provincial life.

Since then, people whose judgments I feared have become friends I gladly meet for an aperitivo in piazza.While we chatted and exchanged news, a distinguished elderly man sat univited at our table. A friend gestured mutely to make clear he wasn’t just a well-dressed panhandler. She introduced me to the professore, whom she warned kindly might find our catch-up session dull. But he smiled wordlessly and surveyed the passing crowd. Then he paid for us all, bowed and left. My friend explained that he’d once been a university “baron,” an authority in his field. Now he lived alone; no family, no wife and no short-term memory.

She and others included him when they met, invited him for dinner now and then, ensuring he wasn’t cheated or abused.

Suddenly, I saw the bell jar of provincial life in a new and kinder way.