Mondo Agnelli: Fiat, Chrysler, and the Power of a Dynasty 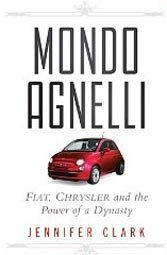 #8220;What is good for Fiat is good for Italy.” Debatable as that old saying may be, it’s certainly true that understanding Fiat is vital to getting to the heart of Italy today. And in that sense Jennifer Clark’s book is essential. The morbid relationship between the Turin-based carmaker, founded by the Agnelli family in the early 20th-century, and Italy’s economy and politics, was last probed in depth by former Financial Times reporter Alan Friedman in his 1989 book “Agnelli and the Network of Italian Power.”

Clark, an experienced Milan-based journalist and auto industry specialist, focuses on what happened after the Friedman book, namely the company’s near death in the last years of Gianni Agnelli (who died in 2003) and its resurrection under CEO Sergio Marchionne. But despite the two-decade interim, some things don’t change, as the titles of both books suggest.

Four generations of Agnelli family members have controlled the country’s biggest automaker, and its fate remains entwined with Italy’s. But things aren’t the same as they once were. The privacy once accorded to Italy’s de facto car royals has been shredded, revealing scandals, some of them lurid. Italian politicians have mostly stopped deferring to the company’s leaders. Most of all, the global auto industry has gone south.

Clark clearly explains Fiat’s arcane agreement with GM, its Chinese box corporate structure, and the legal battle waged by ex-wife Margherita Agnelli, who had challenged the value of the Fiat estate after Agnelli’s death. Clark respects the family but doesn’t adulate it, and that includes Gianni Agnelli.

The book would benefit from a corporate diagram and family tree, and at times slang jars Clark’s speedy prose. But it remains not only a page-turner but also required reading for anyone who wants to know how Italy got where it is today.