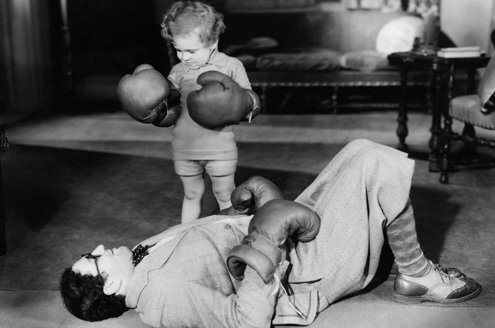 How could he manage when he still didn't know where I kept the pajamas?
W

hen I got the job I was giddy. I’d be whisked off for a week. It was just like a movie. True, I’d only be working on a movie, but I felt like I’d also be living one out. Like “Mr. Smith goes to Washington” only this was more like “Ms. Dugan was going to London.” Like Sally Fields in “Not Without my Daughter” only my working title would be “WOOOHOOO! I’m Leaving Without my Sons!”

That’s when reality set in. I’d be leaving my babies for the first time in four years (okay, they’re no longer babies). Slight preoccupation set in.

“You’re leaving us with him?” my younger son said referring to his father.

“Who is going to baby-sit us?” He wrinkled his brow.

“Daddy can’t baby-sit us!” He was emphatic (and sort of annoyed).

“You’re right! He can’t be your babysitter because he’s your…father!”

How could I leave my husband with what’s become a two-person job? Granted, my part is more child-labor intensive, but the 10 percent I usually let him do softens the psychological edge.

A typical day at the Dugan-Lori household is never just typical.

How could he manage when he still didn’t know where I kept the pajamas? Plus, he didn’t know how to make flaxseed coconut oil pancakes!

He’d have to do all sorts of things outside of his skill set and have to multitask. Especially during early morning mania, which includes but is never just limited to:

“I can do it,” he said confidently.

One of us would be proven wrong. I think we both hoped it would be me.

I scribbled out a schedule that included after school homework, basketball and singing class. I individually pre-bagged lunch snacks and prepared pasta sauces, picking up chicken, beef and pork from the butcher. They wouldn’t starve. Maybe I was channeling my inner Jew. More likely I was just trying to help Marco through what I knew would be eight days of servitude and slavery.

I called friends and asked them to check in. The school was alerted that if the children appeared unkempt, hungry or without their homework, I wasn’t the culprit.

I hugged them extra hard and extra long for days. Leaving them was hard. My heart swelled. I felt a lump in my throat. Tears pooled. God, I’d miss them. After which I packed my bags and sped off screaming, “So long suckers!”

Okay, I didn’t say that — that was more like my character’s dream sequence. What I did say was, “Be good for daddy. Make good choices. Have fun! I love you more than pizza and gelato.” I said everything they might need to hear in the event my budget flight tragically went down in flames (hey, you never know with movies). The last line was delivered perfectly. Too bad they weren’t listening.

When I checked in from London, Marco said, “Everything is perrrfect. They boys are perrrfect. The house is perfect. It’s rrreally easy.” Super Daddy was rolling his r’s.

Okay it couldn’t be that easy.

But when I got home, all the rolled r’s seemed right. The kids were alive (and happy) and the house was spotless (he’s a much better housekeeper than I am). Marco had again proved that though I’ve made many mistakes, picking a husband and father wasn’t among them.

My work in London was entertaining, and in the end my “imaginary movie” left me feeling grateful and just a little smarter. Now I know my “character” can relinquish some of her control and let Marco do his share. The character of Mommy the Martyr has been retired.