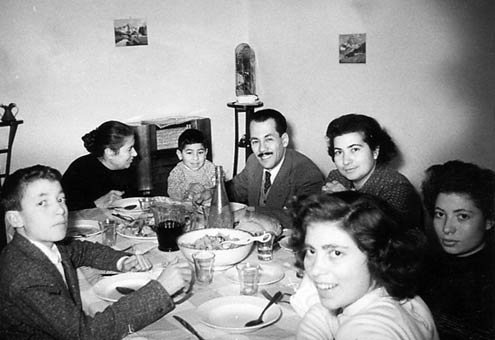 Family meal, 1957: Few changes in the importance of food.
F

riends and I sat in a café in Porto Ercole, still digesting the dinner we’d finished two hours earlier. One friend’s companion, Francesco, had made cozze e vongole followed by mixed seafood pasta, all of it accompanied by carefully selected local white wines. Predictably, we’d all eaten too much. And the food stayed on our minds.

“It’s the first time I’ve added capers to cozze e vongole,” Francesco said thoughtfully. “Or tomatoes. But it worked, no?”

“Well, I’ve seen tomatoes with clams and mussels. Not capers, though. È diverso,” one friend offered.

“Well, I think the capers were a good idea, because with them, I didn’t have to add any salt at all. They provided the flavor,” added Francesco. “Era buono, si?”

As the conversation continued onto the second course, I leaned back in my chair, sipping the mojito that (after some discussion) we’d decided was too cloyingly sweet, and tried to suppress a smile.

Growing up, I heard a lot of talk about food. My mother and grandmother are both good cooks and conscientious eaters. Steaming bowl of lentils or chicken stew would come with remarks about the dish’s nutritional properties and how it fit in with Weight Watchers or the Atkins Diet. After the meal itself, relevant comments were jotted into the recipe book — “less salt,” or “without olives” — for future improvement. (If the dish passed general muster there was always a next time).

Somehow, none of this enthusiasm translated to my turning into any kind of cook, much to my family’s chagrin.

There’s no denying that my family loves food. Still, these conversations had a practical side, geared toward perfecting a recipe for future use, or explaining how its properties helped fuel our bodies, fight cancer, and keep our weight down. We didn’t wax rhapsodic about food for the sake of food alone.

But Italy gave me a different take on eating. Remarks about nutritional properties were rare (not counting the national good digestion obsession, a claim splashed on everything from sparkling water to ice cream). Nor did post-dinner food breakdowns seem geared toward collecting notes for future improvement. Defects were addressed with the air of something that needed reflecting on, not necessarily repair.

Still, food conversations seemed to go on and on. I sat buses in front of old ladies who spent 20 stops discussing ways of preparing spinaci. I heard conversations about meals at the post office, the questura, even the beach, where you’d think that being mostly naked might put a damper on food talk.

Never mind what happened when the eating actually begins. At a restaurant, the meal narration begins with the close reading of the menu. While Americans might ask if a dish is gluten-free or can come with dressing on the side, Italians want to know exactly how the dish is made, from clarification about the local pasta (is it closer to spaghetti or tagliatelle — or, oh, it’s like strozzapretti?) to expressing skepticism about the ingredients (are the fiori di zucca still in season? Is the pesce spada frozen?).

When it comes to cuisine, surprises should be avoided. The more one knows about a dish in advance, the better it’s enjoyed once it arrives.

If people read newspapers with the same kind of skepticism reserved for restaurant menus, Italy would be a very different place.

When the food actually comes, politeness puts a break on criticism. After tasting the wine, for example, the taster almost always says buono, even if it’s not quite as good as he (and yes, it’s usually still a he) expected. When the table toasts and sips, each drinker is also required to say buono, out of deference to the person who chose and tasted the wine and the restaurant itself. When the food comes, there’s much sharing and trying of one another’s dishes, which ushers in commentary: something is more delicato than expected; something else a little spicier than previously thought. Criticism usually emerges when the dish fails to live up to the menu’s description.

Still, all remains buono — at least when the waiter asks.

Safely out of the restaurant — or, at someone’s home, once coffee has arrived — the real post-meal begins. What worked and what didn’t. What was particularly special or unique (a particular point that always tickles me, since, overall, many classic dishes are made with as little deviation from tradition as possible). At home, the cook always seems as likely to be congratulatory of the meal, or as negative, as anyone else at the table.

Meal conversation occasionally continues well into the night. Even days later, comments will still crop up. “I cooked cozze e vongole and spaghetti con frutti di mare for the girls the other night,” I heard Francesco tell a friend of his a few days later.

Before I could stop myself, I heard myself interjecting. “Yes, it was molto buono. And the capers were an excellent addition!”

Though I might not be able to throw much more together than pasta (with store-bought pesto), talking at length about food is something Italy has taught me to do well. Eating in Italy is a form of participation. Just don’t ask me for anybody’s recipe.