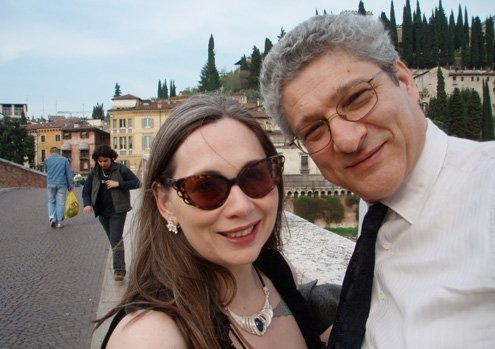 Moira Egan and Damiano Abeni. "I've found the great love of my life in Damiano." she says.

Poet Moira Egan is a wayward Irish Catholic girl who has spent much of her adult life escaping her home town of Baltimore. She wears flamboyant Dame Edna glasses, has smooth auburn hair elegantly streaked with gray and brandishes a tattoo high up on her left breast. She has an easy smile and enjoys a good joke, especially if it’s about Sarah Palin.

Egan was teaching creative writing to high school students by day and writing her Bar Napkin Sonnets by night when she was introduced to Damiano Abeni, at a literary soiree in Baltimore. Abeni, an epidemiologist originally from Brescia, lives a double life as a translator of American poetry. Sparks flew between them and creative lightning struck. “After we met I went out the next day and bought her book,” he elaborates. The next time they saw each other, after a bout of bungled phone numbers that nearly cost them a first date, Abeni presented her with a freshly translated poem from her collection. Egan’s days as a spinster sonneteer were numbered. After a three-week holiday in Malta, where Egan was staying on a fellowship, the couple was married in Baltimore. Their nuptials were profiled two weeks later in The New York Times. They moved to Rome soon after.

Egan, who holds an MFA from Columbia, has spent three years in Greece teaching creative writing in Salonika. Fluent in German, French and modern Greek, she is the first to say her Italian needs improvement. Her poems, brimming with mythic imagery and Mediterranean botany, conceal a healthy eroticism all too rare in contemporary American verse. Her first book, “Cleave” [2004] was nominated for a National Book Award.

Unlike her husband, Egan is not a translator. “I’ve only translated two poems in my life, one by [Constantine] Cavafy and one by Rilke. I was dissatisfied with the existing translations,” says Egan. Since meeting Abeni and moving to Italy, however, she’s begun collaborating with him on translation work into Italian. She has also been translating the work of contemporary Italian women poets into English.

She speaks readily about her influences, and the name that pops up more than any other is Brooklyn poet and fellow Bryn Mawr sister Marianne Moore, known for her unique haberdashery as much as for her syllabic literary style. Egan’s poetry is included in “The Best American Poetry 2008.”

Who is your ideal reader?

One is the guy at the bar of the Night Café in New York City. When I was a graduate student at Columbia we used to give weekly poetry readings there, leaning up against the pool table. That was the first reading I gave as a serious poet. I was very nervous, reading poems like “Leda Gets Laid” [from Egan’s first collection, “Cleave”] and some other naughty poems. This guy, who looked like Joe the Plumber, came up to me afterward. He was drunk and wobbling. He said, “Honey, I don’t know nothing about poetry, but your shit really rocks!” My other ideal reader is Damiano.

How has your life in Italy affected your work?

Profoundly. My older work was strictly American. I no longer feel connected to that kind of stance. The speaker (of the “Bar-Napkin Sonnets”) was not always me. She was a very cynical, independent woman looking for a push-me pull-you connection. I no longer feel the things that I expressed in those cynical, sexy sex-in-the-sonnet poems, and I probably never will again. The new poems are all me. I’m trying to figure out my next voice. But I’ve finally made that connection, I’ve found the great love of my life in Damiano.

Do you ever feel the poetry evoked him?

Yes, I do. I wouldn’t be the first to say that poetry affects the world around us. Look at words related to poetry: chanson, canto, incantation. All those words are related to magic, spells, witchcraft. If you believe in therapy, and you’re not just going to psychoanalysis for 47 years like Woody Allen to make jokes about it, you are doing something to change your life. Writing can perform the same function. It helps you to plot out your life. As Rilke says at the end of his poem, “You must change your life.” Art is not easy, no kidding.

Are you surprised to have become a writer?

Not at all. Some part of me always knew that was going to happen. I tried to escape. I went to Paris to study fashion design, but the muse just sucked me back in. My father was a writer. He wasn’t a famous writer, but he understood what it takes to be one. You need to read, write, think and experience. And then read and write some more. That was the ethos I grew up with.

How has your work been received in Italy?

Amazingly well! Sometimes I joke that I’ve been writing in the wrong language all along. Damiano submitted some of his translations of my poems to the journal Nuovi Argomenti, where (full disclosure!) he is one of the contributing editors. Of the first batch, they published nine of my poems. Later, three more from “Bar Napkin Sonnets.” The influential critic/editor Goffredo Fofi published a group of poems in his journal, Lo Straniero. Coming very soon will be an anthology of love poems by women, published by Newton Compton Editori, that will feature four of my poems. Also coming soon will be a chapbook put out by Edizioni L’Obliquo, a fine-arts and literary publisher in Brescia. So Italy has been a warm and welcoming place for me as a poet.

What do think about when you begin to write a poem?

Well, I don’t have any theory. Mostly I’m thinking about the poem. I have a metaphor for what happens when I feel a poem inside me. Half-jokingly — but not very jokingly— I think about the idea of a muse. Say the muse has given me this benison of something I need to write about. It starts to grow inside of me: things I see, stuff I overhear, senses that I experience… if the seed of the poem is strong enough… whatever is relevant to it begins to attract itself to the little seed. And then it starts to grow, like a Velcro snowball. Everything is sticking to it as it’s growing. That metaphor would only work in a [John] Ashbery poem (laughs).

Many of your poems have erotic overtones. Are you playing with taboos? When you think about the most intensely experienced things in your life, reading Plato doesn’t really make your hair stand on end. It doesn’t make your toes curl up, as fulfilling as that is. You can’t do a Vulcan mind-melt effectively in a poem. What would that sound like? Poetry works as an overarching form of connection. Eroticism in writing is about not saying it directly. I don’t have that many body parts in my writing. Poetic language — whether it’s about sex, flowers or leather — is all about saying something while not saying it. John Ashbery has a line that captures the idea: “Something shimmers, something is hushed up.” I like to play with the implicit-explicit order. People are nervous about sexuality. Sex is a naughty thing and all that. It’s kind of taboo. I don’t agree, naturally. I’ve always rebelled against the puritanical streak.

Has Italy inspired any new work?

Since I’ve been in Italy I’ve begun a new manuscript called “Strange Botany” about my new Mediterranean life. I’ve always been a sonneteer, but now I’m trying to expand into syllabics, inspired partly by the poet Marianne Moore, who also went to Bryn Mawr. She had funny hats, I have funny glasses. Moore would write about snails, saying “Hey, I look like a snail in this poem, which is about a very delicate creature which lives inside a shell that has been created around it.” It’s a kind of disjunctive autobiography.

Some of these poems are based on the “Fibonacci sequence.” Leonardo Fibonacci was a Pisan mathematician from the 13th century who introduced an Indian numerical sequence to the West. Oddly enough it reflects nature. Pinecones, artichokes, shells, they start narrow and open up. The way leaves are born. They all follow the Fibonacci pattern (which begins 0, 1, 1, 2, 3, 5, 8, 13 and so on, each number is the sum of the previous two). So now I’m trying to put this into my poetry. Do I sound like an obsessive-compulsive? Many of the poems are about turning plants into food. I like to think of them as the perverse hybrid offspring of Linnaeus, Marianne Moore and Marcella Hazan, the cookbook author. Damiano has been translating them into Italian. They look very similar on the page, which is an interesting correspondence.

Your poems have been widely published both in North America and abroad. Is publication the bane of a writer’s life?

Well, if you’re not suffering from writer’s block you may be suffering from publication block. It’s difficult to market yourself. Most writers are almost freakishly introverted. My least favorite thing about being a writer is sending my stuff out and getting the rejections back. But if you’re going to be serious about it, you’re going to have to do that. I’m very, very grateful that my letters to the world have been accepted as well as they have. When I got an email from [editor] David Lehman that my poems were going to appear [in “Best American Poetry”], I was really happy! I was trapped in the U.S. waiting for my visa to come through. We had just gotten married. I wanted to be at home with my husband and I was miserable. And then I got the news. I thought, “This is almost bearable.”

A WIFE’S POEM; A HUSBAND’S TRANSLATION

to make a wish upon

of the season’s fruit,

cachi, so as I peel this

I make the wish

that each of our

that taste of reunion

and crying both into each other’s

shirts. And it seems to me the fig

of all the above,

the fruit of yin and yang,

in shape, yet deeply

feminine in its opening;

how, on the one hand, it was

sat and found enlightenment, while

these were the leaves

that Adam reached for

to clothe their humanness

that they were naked

and learned of shame. How many fruits

from the strange symbiosis of wasp

and worm? I don’t know, but I think

of the first figs

when we met, how he

the sweet and strangely

ripe but not quite, and he kissed me

and church bells clamored out the Angelus

and he kissed me again and (yes)

I made a wish.

— Forthcoming in an anthology of love poems by women, Newton Compton Editori.