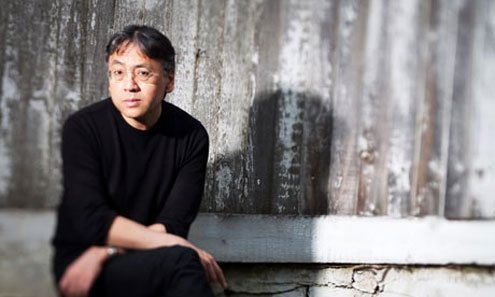 Kazuo Ishiguro: What are we willing to do to be famous.
D

on’t be fooled: there are no romantic ruminations here; no Eine Kleine NachtMusik. Instead, we’ve got an intriguing — and slyly misleading — “musical” title for Ishiguro’s new short story collection (“Nocturnes: Five Stories of Music and Nightfall” (Faber and Faber, London, 2009). With the “Music and Nightfall” subhead, the reader is bound to expect prose version of the nocturne’s gently evocative music format. Forget that.

So what’s the real role of “music” here? Well, most of the narrators are musicians. And “music” determines the five settings, though in wildly different ways: friends listening to a few golden oldie tunes; some fill-in players for restaurant orchestras; a fading crooner; business agents; hangers-on; and satellite wives. In short, the music world cross-sectioned. In order to create a finely nuanced picture of our culture’s insatiable quest for “recognition.” When even a YouTube news flash may qualify as “fame.”

Tricky Ishiguro: these are certainly mock-nocturnes. And nothing gentle about them. No soft glow, either, to the several “nightfall” hints. Across his quarter century career, this writer’s turned his severe ironic gaze at delusion, pretence, and illusion. Look at his Booker Prize-winning “The Remains of the Day.” He’s always publicly insisted that work concerns self-denial: the denial of the self. Think about this as you read the new work.

It’s a quintet of lightly interwoven “music world” motifs… but, focus is on character study. Designed to be acutely disturbing, and unsettling.

In the third tale, “Malvern Hills,” an untried guitarist/songwriter chats with ex-concert players. They’re now a middle-aged couple, struggling for gigs in Europe’s dreary hotel-restaurant circuit. Blasted dreams and a failed marriage. Ishiguro likes this innocent youth-meets-hardened-pro contrast so over-much, he uses it in four of the stories. Where youth learns from older musicians some mean lessons about glamour and “success.”

And what better study subject for “fame” than the music world? Don’t its personalities and products uniformly rely on public notice for survival? Through them, the writer holds a mirror to that deep longing for notoriety which invades today’s globe like a virus.

In the four tales by musician-narrators there’s one shared dream: “making the big time.” A fifth account concerns a mid-life schoolteacher listening with an old friend to their one-time favourite CDs. Out of the blue, his friend suddenly, viciously attacks him as the man who never “made it”

“Making it”: that’s the key to “Nocturne.” Whether English, American, Austrian, Polish, Swiss, or Italian, protagonists and co-players have one goal: “the big time”; “the big league”; public acclaim.

Look at the fourth and title story: follow-up to the fine introductory tale “Crooner,” and the author’s most compelling vivisection of our third millennium fame-game.

In “Crooner,” aging singer Tony Gardener hires the guitarist/narrator to travel a Venetian canal with him. In order to serenade Tony’s wife, Lindy. En route, Gardner explains this particular (night-fall) serenade. It’s a goodbye. Because he needs a comeback. What launches that? “You gotta be seen with a young gal on your arm.” Lindy’s in her fifties! It’s time to go their separate ways. A husband’s simple PR calculation on coupledom.

The “Nocturne” segue is a wackily comic look at what the Lindys do when they’re between notable husbands. When their faces no longer appear on magazine covers. They turn to plastic surgery, that’s what they do.

Same last-ditch hope taken by a saxophonist whose manager warns: there’ll be no more work until he changes that ugly face. And so a hospital gowned post-surgery pair meet in the semi-dark of a hotel’s third floor. Another satiric dart at romantic “nightfall”; for this area is set aside for Dr. Boris’s bandage-wrapped patients.

Bored, Lindy invites the sax player to join her bizarre wanderings in the hotel’s midnight-empty, public rooms. During their brilliantly slapstick adventure, Lindy bubbles with encouragement. For herself: “It’s been a long time between husbands… But Dr. Boris is the best.” For the narrator: “When they see your new face, your career’s going to rocket. You’ll never have to be just part of the public again.”

Now… guess what. There’s no close to the stories in this collection. We never learn if Lindy did or didn’t make it to the cover of “Time.” Nor if the sax player became a headline act. Ishiguro simply focuses on what we are willing to do, to ourselves, to become “famous.”

Once upon a long ago, in “Sister Carrie,” Theodore Dreiser examined 1900 America. When small-town Carrie arrives in the booming big city, and soon becomes a noted actress about-town. Yet she wistfully daydreams… a lot. About the next rich man, or the next theatre role — whatever will keep her on the front page. Her life passes in blind yearning.

More than a century after Dreiser, that American daydream has gone exponential. If Carrie and Lindy should some day meet in celebrity heaven, they’ll have no trouble recognizing each other.