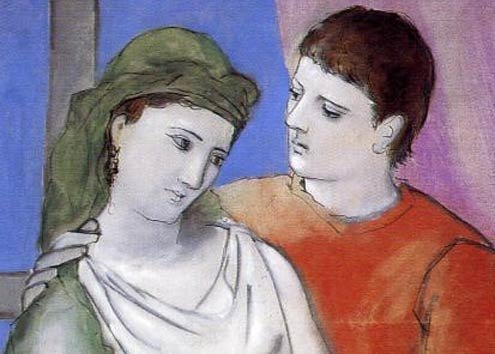 orris and Joanna blazed into the New Year with the animal voracity of two escaped convicts. Their bodies were unstoppable. Somewhere around week five he told her she might as well take out real estate in his bed. She giggled, pulled the sheet up over her head, and finished what she’d started.

Later, she tucked her head in the crook of his shoulder and felt his fingers play chords on her belly. Even when the fire died down, she still felt warm.

But in the days preceding Valentine’s Day she noticed a shift. His messages turned sporadic and he stopped answering the phone. She and a girlfriend took themselves out to dinner and ended the night trying not to look at their phones.

After nearly a week of silence she called him. She was perplexed. It had felt so good, like the beginning of something, something solid that they could build upon.

His reply: He’d assumed theirs was a primarily sexual relationship and wasn’t really ready anything more.

Stunned, her mind replayed the past month — a flutter of smiling snapshots accompanied by calm and confidence. How could she have been fooled? It felt like so much more than that. Was it possible he didn’t feel it too?

She considered a sullen retreat, but something told her not to surrender just yet. She took a step back and waited.

Sure enough, within a few days he called to say he missed her and would she come over. They cooked dinner and got 10 minutes into a movie before their hands found their way right back to the familiar places. They barely slept, and when she rose early for work, he whined for her to come back to bed.

Nope! She smiled, gathered her things and breezed out the door. If this was purely sexual, there would be no morning snuggle, no imploring to return to bed. If he wanted her back, he would have to want her in more places than that.

She did her best to resist him-but their unwavering chemistry weakened her knees and set her on autopilot back into his arms.

Until one night it didn’t. She was tired, cozy in sweats and working her way through a term paper. She ignored three text messages and a call only to answer him the next morning that she had been busy. It was the truth.

For much of spring and early summer she spent time with friends and attended a number of seminars. She was nearly finished with a Masters in integrative health, and she’d begun to amass a small following of willing trial subjects.

Mixing up rice flour carrot cupcakes with dairy-free frosting, she began to feel lighter. Her juice concoctions soothed sore throats and muscle aches, and soon enough, she knew she could heal herself too.

In July he called. He wanted to talk. He wanted to be around her, needed to be even. Yet he’d broken an engagement shortly before meeting her and felt unprepared to confront a new commitment. They’d never discussed these things during their first fiery weeks because their passion had left no room for it. He hadn’t wanted to puncture their exhilaration, so instead he had let it swell to bursting.

She listened. It all made sense, but she wasn’t sure how long she was willing to wait. She knew what she wanted and felt more ready by the day.

He nodded, and they spent the rest of the night catching up and kissing. He pulled up to her driveway and they parted.

That was the last she heard for month. He traveled for work, and she was grateful for the break. During an especially hot summer night, she wound up on a friend’s back porch doing tequila shots with a notorious radio DJ. She had no idea who he was until they woke up in her bed and his show came on.

They both had a laugh, especially when they stood up. He was four inches shorter and 10 years younger. They went out for pancakes and wished each other well.

She loved telling that story, and when Morris called her to wish her a good start to the September semester, she told him too (with slight alterations to the ending).

In the space of a few minutes they’d made plans for dinner. Her birthday was coming up (that was the real reason he had called), and he wanted to take her out.

The following Friday Joanna dabbed on an exotic oil and curled her hair. His text message blinked: Are you ready?

Her reply: Are you?

Downstairs she smoothed her skirt over her knees and opened the door.

He held a birthday card in his hand with one word scribbled in red.