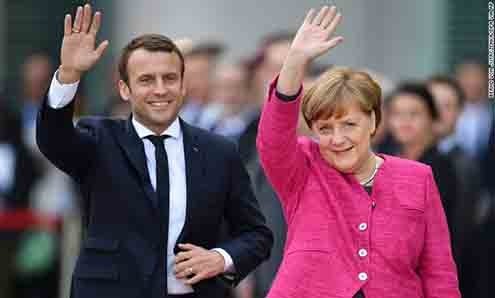 The two M's, Macron and Merkel, have patiently helped restart the EU.
D

onald trump has received an early Christmas present. The U.S. dollar is plunging globally, favoring the sale of American goods abroad. The economic reasons are myriad and complex. The psycho-political ones, at least in Europe, are far less arcane.

The four-year tide of right-wing nationalism has receded, at least temporarily. In Holland and France, aggressively right wing, protectionist candidates were beaten, by a hair in Holland but by a country kilometer in France.

France’s political housecleaning including the unexpected ascent of a president, Emmanuel Macron, who knows and likes business, and (like Trunp) cares about the movement and “progress” of money. However subdued his political credentials, his academic and financial ones are sound. His presence in France alongside Germany’s more cautious but equally savvy Angela Merkel, who seems likely to win re-election, fortifies the European, and euro, axis. A year after Brexit, Britain now seems very much the odd man out, with newly compact France and Germany ready to reassert their sweeping gavel.

While Trump is erratic and his worldview flimsy if not intellectually sterile, Macron, 39, and veteran Merkel preside over streamlined states that despite immigration and terrorism woes continue to make a commercially and politically global imprint. For months, brokers and bankers fretted over the unlikely notion of a France under Marine Le Pen. The prospect frightened unsettled the euro. Though the probability of a Le Pen election was always slender, currencies are fragile, emotional creations that respond badly to the potential of upheaval. As Trump busies himself praising the rise of the Dow while fighting all manner of domestic scandal, Europe can get back to the business of trying to dust off its unity project.

That won’t be easy, with EU subsidies about to run dry in ultra-conservative Poland and Viktor Orban’s malleable Hungary again turning militantly nationalistic. Greece remains stalled and Italy’s situation is no simpler.

Given a chance to join, or semi-join, the Franco-German “club,” Italy imploded politically, bits and pieces of left and right behaving like recalcitrant atoms. It is now the hands of a pseudo-caretaker prime minister with the outcome 2018 national elections impossible to predict. Italy’s domestic weakness has left it unable to make a case for wholesale EU “landscaping” of the very real migration dilemma, which isn’t going away anytime soon.

So far, the two M’s, neophyte Macron and immoveable Merkel have successfully thrown rhetoric at Italy’s desperate attempts to manage its increasingly desperate refugee flow. Libya’s porous coastline is a sieve for Africa’s northbound misbegotten. Recipient Italy is the gangrenous peninsula whose warnings all seek to portray as hysterical. They’re not.

For now, and likely for many months ahead, the once-battered euro seems likely to continue its dollar-eating march. The word recession is slowly but decidedly slipped from European headlines, partly because of modest growth, but also because the word itself has for now outlived its decade-long media welcome (even alarmism has a cyclical life in journalistic terms).

For those who predicted the EU’s demise after the Greek crisis of 2010, the rebound is satisfying, and proof the Union is sturdy. That point was hammered home even more resoundingly after Brexit, a wakeup call badly mismanaged by Britain’s Teresa May. Made to look briefly ridiculous, Brussels – the EU’s symbolic capital – was lifted off the garbage heap and recast as the capital of the “new” France, flanked by the “new” Germany, both grown tired of British insults and Trump-scoffing. The European Central Bank, for years mocked as impotent, has acquired newfound respect and relevance.

The euro revival at the expense of the weak dollar is no wonder drug. It does however suggest rumors of the EU’s demise were greatly exaggerated, as were warnings that the Asian boom, led by China, had come up short. Failure is fashionable to write about, as is crisis. The slower, far less spectacular forward plodding of big nations makes for far duller reading, but composes the backbone of the peacetime world in which we live, high on glitches but far more interested in making money and reputations than pausing to indulge Armageddon.